Witness for the Prosecution [1957] 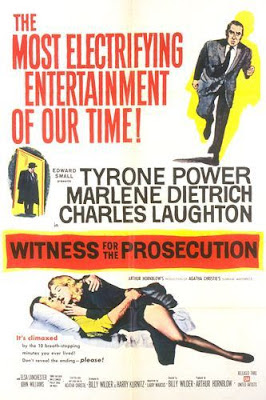 It might be a matter of debate as to which film has been the best cinematic adaptation of Agatha Christie’s whodunits, but the courtroom drama Witness for the Prosecution might easily be a candidate for the most popular. Adapted by Billy Wilder from a hit stage play by the ‘Queen of Mystery’, this was an entertaining film from start to finish, with its concoction of situational humour and a lurid murder mystery. Sir Wilfrid Robarts (Charles Laughton), a renowned British barrister, who is recovering from a heart attack, agrees to defend Leonard Vole, an unemployed and seemingly good-natured man (Tyrone Power) who has been accused of murdering a wealthy widow for her money, against the vehement protestations of his overtly protective nurse (played by Laughton’s real-life wife Elsa Lanchester in order to take care of the ailing actor during the film’s shooting). Things however take a complicated twist when Robarts gets acquainted to the icy femme fatale Christine (Marlene Dietrich), Vole’s wife of German origin. The film begins with a request to the audience from the makers not to reveal its ending as the wildly swinging script is filled with one spectacular twist after another in the final 30 minutes or so, and was nicely enacted by its all-star cast with Dietrich stealing the show for her marvelous double-do. Though engaging for its strong adherence to the topsy-turvy plot, the banter between Robarts and his nauseating nurse, despite being funny at times, did disservice to mood by diluting the grittiness of the storyline – an edgier storytelling would have made the film far more memorable.

Laughton is extraordinary, and steals just about every scene he's in. Yes, this film is among the nest ever adapted from a Christie work, rivaling Clair's AND THEN THERE WERE and Lumet's MURDER ON THE ORIENT EXPRESS. Of course, WITNESS was adapted from one of Christie's plays, and in that department it would be tops. Dietrich is a hoot as well. This has always been a favorite of mine.

In fact, along with the ones you've mentioned (both of which were good films), this would also compete with the Bengali film Shubho Mahurat (adapted from Christie's The Mirror Crack'd from Side to Side) by Rituparno Ghosh, which I'd really loved. As for your views on Laughton & Dietrich, couldn't agree with you more.