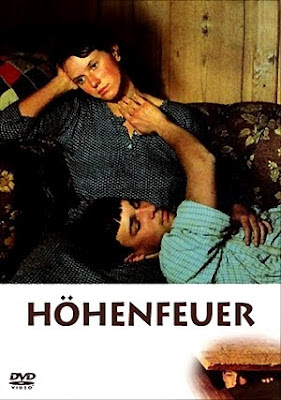 Alpine Fire was the first feature film by documentary filmmaker Fredi M. Murer, and my first tryst with Swiss cinema. The director deserves kudos for displaying considerable restraint and maturity in dealing with a challenging subject matter – that of a dangerously intimate relationship between two siblings against an ironically claustrophobic backdrop. The aforementioned family, comprising of a laconic father (Rolf Illig), his ailing wife (Dorothea Moritz), and their two children, viz. Belli (Johanna Lier) and her younger brother (Thomas Nock) referred simply as “the Boy”, live in a quaint and remote location in the Alps. The Boy, who has been deaf from his birth, spends his day silently involved in laborious tasks assisting his father. His inability to communicate, however, leads to sudden displays of agony and violence, and this becomes an especially stiff obstacle in his path when faced with his oncoming puberty which he finds increasingly difficult to deal with, and therein begins his growing emotional and physical closeness with his loving elder sister, whose naivety too is at odds with her precocious physicality on account of residing so far off from human civilization. The director employed an oft-used technique by juxtaposing the psychologically dense and disturbing content against breathtakingly beautiful surroundings, and though the dialogues were the weakest link in the film, he made deft usage of long moments of silence, along with leisurely pacing and gradual narrative buildup, to create a strongly palpable sense of mood and tension. Upon the inevitable discovery of the forbidden liaison, while the mother reacts with calmness the father does so with fury, thus leading this finely enacted film to a deeply elegiac climax, and the siblings to a sudden process of growing up.

Yes, this is a searing and unforgettable film. In the end, not a masterwork, but still brave and psychologically penetrating work, a rare work from Swiss cinema that has made the world stage. It's often disturbing, but never less than fascinating. I once owned a copy of this film on laserdisc.

Thanks Sam. That's a great summation of the film by you. I literally stumbled onto this film with hardly any prior ideas about it. And boy am I glad that I did - despite some of the flaws, this is a minor gem indeed.