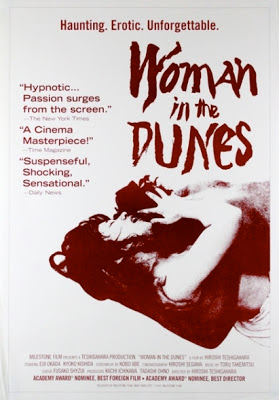 Woman in the Dunes, the highly celebrated and influential Japanese New Wave work, was a compelling exploration of such themes as identity, sexuality, freedom, and the dichotomy of traditionalism and modernism, particularly from the perspective of post-War Japanese society. Based on a novel by Kobo Abe, this subtly formalist and surrealistic exercise was also a visual and stylistic tour de force, and a fascinating peek into psychological terror. The allegorical and Kafkaesque story began on a simple note - Junpei Niki (Eiji Okada), a Tokyo based entomologist, on becoming stranded in the middle of a desert during an expedition to collect insect specimens, is offered accommodation by a group of local villagers in a house located at the bottom of a dune and resided by a widow (Kyoko Kishida). However, he eventually realizes that he is trapped in the pit, and is at the mercy of the villagers for food and water supplies for which he must live with the lady and perform certain daily chores. Thus begins an incredible account of the gamut of emotions that the protagonist goes through – anger, frustration, desperation, calm and peace. The scorching relationship that he also gets embroiled in with his demure companion, despite never really loving or even liking her, also made this a highly sensuous film. The fine performances by the leads were well accompanied by their sizzling dynamics. The haunting narrative, nightmarish tone, brooding atmosphere, and disconcerting content, were marvelously emphasized by the mesmerizing photography and the ominous score, making this an unnerving yet gratifying experience.

"Based on a novel by Kobo Abe, this subtly formalist and surrealistic exercise was also a visual and stylistic tour de force, and a fascinating peek into psychological terror."

Indeed Shubhajit! Most consider this Teshigahara's greatest film, though he has a few others that do push close. It is indeed Kafka-esque, and is a formidable study of building terror. Quite unlike any other film ever made, methinks.

Thanks a lot Sam. Even if one were to overlook its social commentary, it would still make for a formidable watch - on account of its nightmarish quality & its bravura stylistic choices. There's another Teshigahara film that I'm, in fact, planning to watch in the near future - Face of Another.