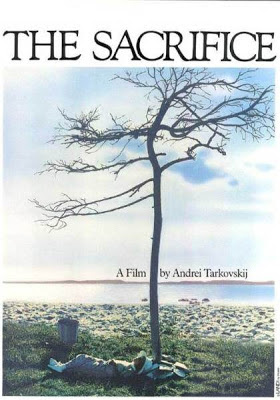 The Sacrifice, the seventh, and sadly final, work of Andei Tarkovsky, remains a profound and engrossing masterpiece. The film was quite Bergman-esque both thematically and tonally, accentuated by the fact that it was made in Swedish, was cinematographed by Sven Nykvist, and had Erland Josephson in the lead role. But, in the end it was a deeply personal statement for Tarkovsky, more so with its theme of spiritual and existential crises, and disquieting observations on the irrationality of human behavior at the so-called ‘moment of truth’. Set within a span of 24 hours, the story is hinges on a fateful get-together in a remote island to celebrate the birthday of Alexander (Josephson), a wealthy middle-aged intellectual. The people present include his emotionally vulnerable wife (Susan Fleetwood), his teenage daughter, his kid son, the family doctor, a local postman, and the house servants. The film’s tone was brooding and austere right from the bravura 9 ½ minute opening shot, and goes devastatingly downhill, ending with deep tragedy, upon the news of an imminent war that might annihilate them all. Alexander, despite his loquacious and pensive nature, seemed a reasonable person. But, in one of the most spellbinding sequences in film history, when he carries out his promise of sacrificing all if war is averted, by putting fire to a piece of cloth that, shot in an audacious single take, slowly ends up engulfing his beautiful house, its sure to leave an unforgettable impression on all. Nykvist's work, with the transition from vibrant colours to drab gray and back which was reminiscent of Stalker, and the glorious outdoor vistas, was breathtaking as well.

"The film was quite Bergman-esque both thematically and tonally, accentuated by the fact that it was made in Swedish, was cinematographed by Sven Nykvist, and had Erland Josephson in the lead role."

Yes indeed Shubhajit, you mention the point that both Bergman and Tarkovsky fans have well-known about this final film by one of the cinema's greatest artists. Yes, spiritual and existential crisis is what sets it apart, and it's an austere and visually breathtaking work that is transcendent.

Thanks a lot Sam. I was in fact thinking that, if someone, who has seen a few of Bergman's films unaware of the fact that this was directed by Tarkovsky, he/she might very well be led to believe that this was directed by the Swedish Master - at least based on the initial third of the film. Either way, as you agreed, this is a stupendous film. And that penultimate sequence was particularly breathtaking.