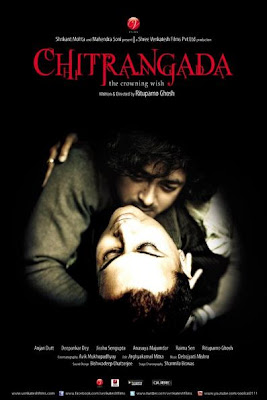 Chitrangada, Rituparno Ghosh’s latest directorial venture, has dealt with the topics of homosexuality, gender identity and the freedom to choose one’s role in a deeply heteronormative and conformist society. The brilliant Arekti Premer Galpo and the competent Memories in March, hence, could easily be considered as companion pieces to this, and not just because he enacted gay characters in all the three. He used as his point of reference Tagore’s renowned dance drama of the same name which chronicled the Mahabharata sub-plot concerning the eponymous warrior princess, who has been brought up as a guy, wanting to transition into a female upon falling in love with Arjuna. Rudra (Ghosh) is a gay and effeminate director of plays, who is in love with a junkie drummer Partho (Jishu Sengupta), much to the dismay of his affluent parents (Dipankar Dey and Anasua Majumdar). Things become further complicated – from familial, relational and personal standpoints – when he decides to change his gender through surgery, more so when Partho eventually leaves him for a pretty female member of the troupe (Raima Sen). The film wasn’t without its pitfalls – inability to avoid certain clichéd tropes, not reining in on the melodrama on a few occasions, lack of suitable build-up to his dramatic decision to undergo sex change. But, it has also managed to be a sensitive, emotionally affecting, socially relevant, self introspecting and quietly semi-autobiographical film, with good use of a narrative within a narrative structure and regular fusion of dreams with reality. Avik Mukhopadhyay’s photography and Debojyoti Misra’s score stood out, as did performances by all, including Anjan Dutt’s as Rudra’s psychiatrist.

I am unfamiliar with this film, but you certainly make quite a persuasive case for it Shubhajit, even with a few noted faults.

Thanks Sam. There was this 2010 film called Arekti Premer Galpo (loosely translated, Just Another Love Story), which too dealt with similar themes. I'd absolutely loved the film (interestingly, it was also Rituparno Ghosh the director's first tryst in front of the camera). Unfortunately I can't recommend it to you even though I'd love to as, for some unknown reason, it hasn't been released on DVD. I was fortunate to have watched it in the theatre when it had released.