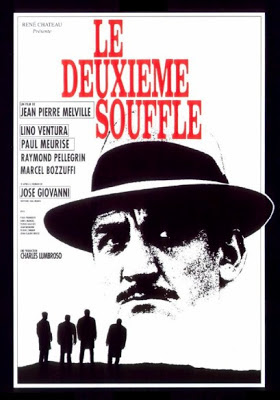 Melville’s name is generally associated with Le Samourai and Army of Shadows, and to a lesser extent, Bob Le Flambeur and Les Enfants Terribles. But he made a number of lesser known masterworks – Le Deuxieme Souffle, Le Cercle Rouge, Un Flic et al are marvelous examples of that. This fabulous gangster and heist film remains an archetypal elucidation of cool, palpable existentialism and doom-laden fatalism – the kind that’s bound to end in tragedy for its protagonists. The film begins with veteran criminal Gustave (Lino Ventura) escaping from prison. His plan is to escape to a life of solitude with the help of his beautiful and resourceful sister Manouche (Christine Fabrega). However three things stand in his way to bliss and freedom – the cynical but brilliant Inspector Blot (Paul Meurisse) who’s doggedly pursuing him, an antagonistic mobster, and the irrepressible allure of one final job. The job, which dealt with the spectacular robbing of platinum bars worth millions from an armoured car, goes as per plan, but that provides the final knell in his coffin. The tar-drenched tone and themes of honour among thieves, the inevitability of fate, and the concept of a lone shark, were superbly accentuated by the moody and expressionistic B/W photography and the minimally used score. Ventura gave an outstanding turn reminiscent of his towering performance in Army of Shadows, as did Meurisse as the world-weary cop, while the other actors, too, were eminently watchable. Though timed at 150 minutes, this exquisitely paced, brilliantly characterized and memorably atmospheric film kept me glued right from the tense first scene to the unforgettably staged finale.

Great capsule Shubs. Le Deuxieme Souffle is inexplicably lesser known among film buffs when it comes to Melville. For me it reaches the same heights as the big three that come after it from 1967-1970. Lino Ventura is fantastic at conveying weariness and exhausted angst. I'm going to pop this one into my machine soon and watch it again.....Maurizio Roca

Thanks a lot Maurizio. Yes, its a shame that this hasn't been recognized as the fascinating classic that it is. Maybe because its a genre film has been a reason for that. Venturo was indeed brilliant, but Meurisse too was equally terrific.

Interestingly, I'm not as big an admirer of Le Samourai as most people are, despite being an admirer of the director. That's one movie I'll need to revisit sometime soon. After all, it was the first film of Melville that I'd watched. So perhaps I'll like it more now than I did then.