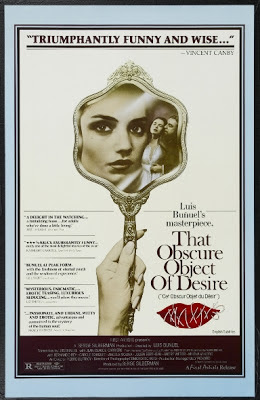 That Obscure Object of Desire, Luis Buñuel’s swansong, was a marvelous culmination of the themes and styles that defined the Spanish giant’s filmography – surrealism, sociopolitical subversion, scathing portrayal of the bourgeoisie class, searing humour and wit, and sexual politics, among others, and all with a deadpan tone. The film dealt with the alternately passionate and weird romantic liaison between Mathieu (wonderfully played by Bunuel regular Fernando Rey), a wealthy middle-aged French man, and Conchita, a young, alluring and financially impoverished Spanish girl, and is told in flashbacks with Mathieu chronicling his frustrating tryst with the girl to his fellow passengers, including a dwarf psychologist. As the story goes, he meets her as a maid in his house. Immediately bowled over by her coquettish charm, he keeps wooing her while she keeps changing her jobs, until he finally get her to agree to be her mistress. However, unfortunately, she refuses to lose her chastity, which eventually takes him to the brink of exasperation. And, to make matters worse, not only does she have a highly erratic demeanor vis-à-vis her disposition towards him, she even brazenly humiliates him in the course of their games of one-upmanship. But, like a man on dope, he keeps obsessively returning to her despite all the frustrations he faces. And, in a stroke of gleeful genius, Conchita was enacted by two actresses – Carole Bouquet and Angela Molina, with each portraying different shades of the thoroughly unpredictable character. The Pierre Louÿs novel, on which the film was based, was adapted at least twice earlier, but this easily remains the best of the lot.

"...surrealism, sociopolitical subversion, scathing portrayal of the bourgeoisie class, searing humour and wit, and sexual politics, among others, and all with a deadpan tone."

Yes indeed Shubhajit, as always superlative economic framing. You leave little for us to add here (ha!) but I'll say this was quite a send-off for Spain's bad boy, a director who maintained thematic equalibrium through his celebrated career. I never rated this particular film as high as his previous DISCREET CHARM OF THE BOURGEIOSIE, but as you rightly note it contains all the right Bunuelian ingredients, and Fernando Rey is again superlative.

Thanks a lot Sam. You're being too kind here :)

I too wouldn't place it at par with Discreet Charm of the Bourgeoisie, which, in my opinion, ranks as his greatest masterpiece alongside The Exterminating Angels. But, that said, this film can be considered as a culmination of his legendary filmography. The fact that this was also his final film makes this that much more special.