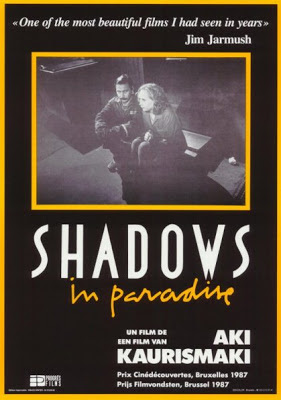 Shadows in Paradise was the first chapter of the ‘Proletariat Trilogy’, Aki Kaurismaki’s droll and darkly funny exploration of the lives of Finland’s working class. Though crisp to the point of being brief in terms of length, the film was nonetheless a delectable yet quietly poignant romantic comedy on two people who have never seen nor aspired for better days. The principal protagonist of the story is Nikander (Matti Pellonpää), a soft-spoken and socially inept garbage truck driver, who spends his free time attending English classes or drinking alone. The person closest to him happened to be his fellow truck-driver who he rarely conversed with, and when he suddenly dies, he befriends a hard-drinking man he meets in jail and gets appointed as his fellow trucker. Meanwhile, he is also silently in love with Ilona (Kati Outinen), the cashier in the supermarket he buys his stuffs from. Finally he finds the courage to ask her out, but their first date ends on a comically disastrous note for him. However, she slowly starts reciprocating his feelings, particularly after she loses her job for no fault of his. Through this rather simple premise Kaurismaki succeeded in brilliantly portraying tragically lonely people innately at odds with the world around them and simply going through the motions in their unspectacular lives. He also painted a bleak but whimsical picture of working class Finnish society with all their disillusions and alienation, albeit in an incredibly muted and understated manner, and with dry wit, sparse conversations and excellent soundtrack, highly reminiscent of Jarmusch's films. Pellonpää gave a particularly stellar performance as the dour and clumsy protagonist.

I'm a huge fan of this film and I'm glad to see you rate it so highly as well. I've been in love with it since I saw it a few years back. It's really funny and poignant. Marvelous compositions too. Have you seen Kaurismaki's Match Factory Girl? That one is EXTREMELY dark but very sly. Just about the darkest little comedy I've ever seen, with a very affecting and quiet performance from Outinen. You might like that one too.

Thanks a lot Jon for sharing your love for this wonderful film. Kaurismaki brilliantly fused dark social commentary with a whimsical love story without going overboard even for a moment.

This is, in fact, my first tryst with Kaurismaki (I know, I should have gotten around to him earlier - you can blame my laziness for that). But, now that I've entered into his world, I shall be watching many more now.

In fact, I've already watched Ariel, the second chapter in his Proletariat Trilogy, and shall be reviewing it soon. And yes, the next film of his that I watch would be Match Factory Girl, which will conclude the trilogy for me. And the one after, in all probability, I Hired A Contract Killer.

Interestingly, whatever film of his that I've checked out so far, are not more than 70 minutes long. Is that trend common to his entire (or at least a major part) of his filmography?

I would say that tends to be the case....even with some of those Leningrad Cowboys movies too....I do like that first one from 1989 I think it was. It's rather off the wall, but has a very funny premise and well written with another droll performance by Matti Pellonpaa.

Yes, Matti Pellonpaa seems to be a very good actor. He was excellent here, and was quite good in Ariel too in his supporting role.

Its really such a pleasure, as a cinephile, to be immediately engaged to the works of a filmmaker hitherto explored. In the recent past the same has been my experience with Theo Angelopoulos & Shohei Imamura. The first films of theirs that I'd watched were, respectively, The Travelling Players & The Pornographers, and I was absolutely bowled over by both the films.

I agree it is fun to discover directors for the first time. I need to see things by Angelopoulos. I don't think I've seen one.

I can safely assure you that he's a director who deserves to be explored more. If you're planning to, I'd suggest you start with The Travelling Players & follow it up by The Hunters (they are thematically as well as stylistically very close).

I am not the huge fan that you and Jon are of this particular film, but yes I do like it, and appreciate both the superb discussion and fabulous capsule review. Like Jon, I think THE MATCH FACTORY GIRL is the director's masterpiece.

Thanks Sam. Well, I too am now of the opinion that Match Factory was Kaurismaki's opinion (as I've managed to watch it in the meantime). I'll write about it soon, but before that I need to write on Ariel :)