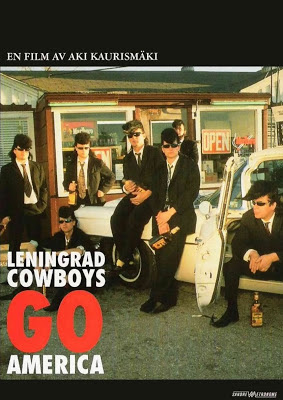 The quasi-musical and mockumentary Leningrad Cowboys Go America remains the most internationally popular film of the ‘King of Deadpan’ Aki Kaurismaki. This quirky and satirical parody, filled to brim with absurdist plot developments and dry humour, focused on the farcical travails of a fake rock band (who were ironically better than what they have been made out to be). When their music doesn’t find takers in Siberia, they, along with their self-serving manager Vladimir (Matti Pellonpää), move to US in search of success – because, as they are wryly informed, anything sells there. However, their audition in New York does not please the agent, and are instead recommended by him to play at his brother’s marriage in Mexico. The rest of the film focused on their road trip through the country in a used Cadillac, and playing gigs at various stopovers in order to earn money. The wild and in-your-face dresses and hairdos of the band members, and the way they behave and converse, were incredibly entertaining. Kaurismaki provided jabs at a number of serious themes on the way as well – from unemployment and condition of blue collar people to cheeky bastardization of what democracy and socialism entails, through the hilarious relationship between Vladimir and the band. And, to top it all, this also managed to be a worthy road movie in its engrossing portrayal of Americana along with the traits and idiosyncrasies that define the various places. The soundtrack was superb, and the acting of the ensemble cast, in particularly that of Pellonpää, was quite good. In an apt gesture, fellow deadpan specialist Jim Jarmusch played a cameo in it.

Shubhajit I think you found a favorite new director to like! This is a really funny film! One of Kaurismaki's funniest. Related to the WiTD comedy countdown this past year, I could not believe we didn't get any Kaurismakis on that list. I voted for 2 of them and almost voted for this one as well. I don't recall anyone else voting for any of his which I thought was tragic.

Yes Jon, I've indeed stumbled upon a filmmaker to admire and whose works I'd like to follow more. His sense of dry, deadpan comedy, and ability in finding something wrily farcical and comical even in the most mundane things make him special. Unfortunately, I hadn't watched any Kaurismaki when we'd voted for the Comedy Countdown at WitD. I'd have surely voted for at least 1 or 2 of his films otherwise.