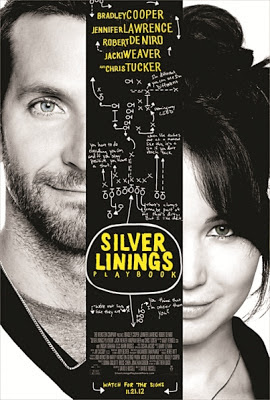 Despite Silver Linings Playbook being, at the end of the day, an unabashedly "feel-good" film, director David O. Russell managed to make it stand out from the crowd, even if by only a small distance, on account of the quirky tone and neurotic characters. Like his previous film, The Fighter, this too was an underdog film, where the protagonists are essentially outsiders to the social norm. Patrizio (Bradley Cooper), who is afflicted with bipolar disorder, had been put into a mental facility due to his violent reaction upon having found his wife with another man. Entrusted to the care of his parents, he is convinced that he has changed enough to get his wife back, who, incidentally, has put restraining orders on him. In this pursuit he befriends Tiffany (Jennifer Lawrence), an asocial young lady who has just lost her husband, who bargains him into participating in a dance competition in lieu of her delivering letters to his wife on his behalf. To add to the idiosyncrasies, his father (Robert De Niro) is a bookmaker with borderline OCD and is highly superstitious about Philadelphia Eagles, while his closest friend (Chris Tucker) is smooth-talking fellow inmate who keeps crashing out of the facility. The film’s humour revolved mostly around the whimsical and irreverent interactions between these characters. Lawrence was particularly good, while De Niro was easily the funniest of the lot. The film, however, was in its weakest during the some of the more serious moments as the script oftentimes veered into overly sentimental and even clichéd territories – most notably in its resorting to an overused and predictable climax.

Yep Shubhajit, it is predictable and often cliched, and the drama features contrived histrionics. I have railed against this film for months and feel it did not deserve the awards/nominations/good reviews it has attracted. Some are smitten with it though, and Lawrence has obviously hit the big-time now.

I was particularly annoyed with the cliched climax - that perhaps did the biggest disservice to the film. But yes, Lawrence hopefully looks set for a promising career. Thanks Sam for sharing your views on this recent release.