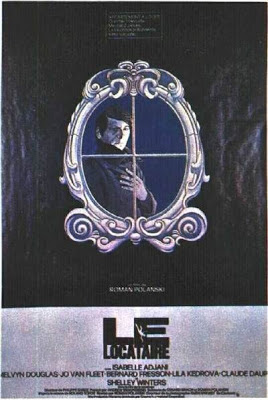 With The Tenant Polanski drew curtains to his much acclaimed ‘Apartment Trilogy’. Though paranoia formed the key link between the three films, this was much closer to the purely psychological horror of Repulsion, arguably the best of the lot, vis-à-vis Rosemary’s Baby which had cheekily blurred the line with physical horror in its dubious finale. The movie began with Trelkovsky (played by Polanski himself), a meek, docile, introverted and awkward young man, moving into a shoddy apartment in a gothic building which, till a few days back, had been occupied by a lady who has committed suicide. The movie chronicled the protagonist’s inward journey towards hallucinations, social breakdown, mental disintegration and ultimately madness, on account of his obsession with the life of the former occupant, and extreme paranoia on account of his suspicion of his puritanical landlord and uptight neighbours. The only human contact that this tragically asocial guy managed to forge was with a pretty, geeky lady (Isabelle Adjani) who was a friend of the dead lady. Initially I had aversions about Polanski the actor; but, in the end, he managed to portray, reasonably effectively, his character’s bizarre transition, sexual identity crisis and morbid alienation, while also imbuing it with a sense of poignancy. The brooding and atmospheric photography by Sven Nykvist, too, was very good. The most interesting aspect about the film lay in the blurring the generic line between distressing psychodrama and darkly disturbing black comedy – it’s hardly discernible whether Polanski was chronicling the tragic story with empathy and sincerity, or having fun with his audience’s expectations and involvement.

"The movie chronicled the protagonist’s inward journey towards hallucinations, social breakdown, mental disintegration and ultimately madness, on account of his obsession with the life of the former occupant, and extreme paranoia on account of his suspicion of his puritanical landlord and uptight neighbours."

Brilliantly stated! Yes there are compelling connections here to REPULSION and ROSEMARY'S BABY and the film is definitely a hybrid of disturbing psycho-drama and black comedy, though the former element is more dominant. Great review!

Thanks a lot Sam. Yes, the connections to the two films were unmistakable, making the three quite distinctively part of a trilogy. But personally I found it closer to Repulsion. I guess the darkest episode in his life occurred soon after he completed this film, thus bringing to a close the incredible first half of his career.