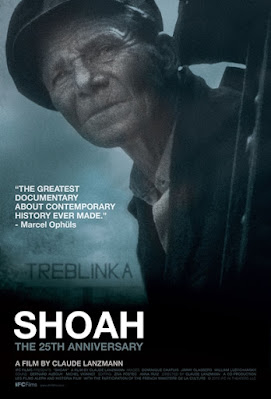 Shoah is a staggering work and a monumental achievement in every conceivable sense. Around a dozen years in the making and clocking at 9 ½ hours, it necessitated French intellectual, filmmaker, documentarian, journalist, academic and Holocaust chronicler Claude Lanzmann to travel around the globe – France, Germany, Poland, Switzerland, Greece, Israel, USA – in order to unearth, meet and interview his myriad subjects – victims and survivors, witnesses and bystanders, perpetrators and collaborators – by coaxing them into delving into traumatic memories, sharing gut-wrenching experiences and revealing dark episodes, and thereby examining the “what”, analyzing the “how” and ultimately hoping to comprehend the “why”. Gargantuan in scope, scale and ambition; radical in its form in that it was bereft of archival footage and therefore composed entirely of testaments, interactions and glimpses recorded in the “present”; in equal parts political, historical, philosophical, journalistic and existential; and, alternatively horrifying, disquieting, poignant, combative and devastating; this wasn’t just an astounding and towering cinematic achievement, it possibly also remains the single most important film on one of the most macabre chapters in human history. The anachronologically structured documentary broadly focused on four extermination camps – Chelmo, Sobibór, Treblinka and Aushwitz-Birkenau – along with the Warsaw ghetto. The dreary exteriors were recurrently juxtaposed with first-person accounts by individuals recounting stories of industrialized mass murder, dehumanization, banality of evil, uprisings and scarred memories, and featuring, among others, surviving Jewish inmates and Sonderkommando members (the indelible sequence featuring the barber Abraham Bomba was obliquely referenced by Sivan and Khleifi in Route 181), the Resistance, Holocaust historian, SS officers and guards at the camps (whose faces Lanzmann secretly filmed without permission), Nazi bureaucrats, train and wagon drivers, and Polish residents from adjoining villages.