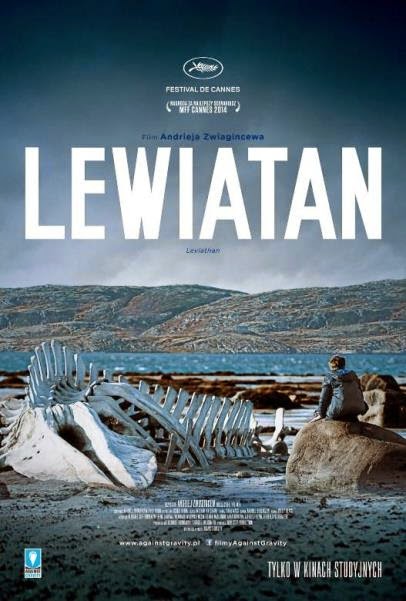 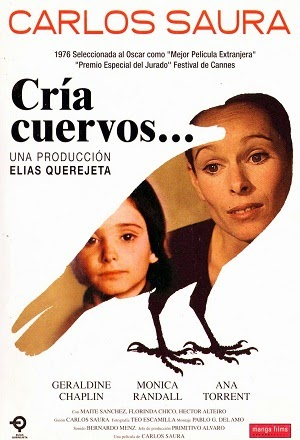 Spanish giant Carlos Saura’s 1976 masterpiece Cria Cuervos, the title is a Spanish proverb which means ‘raise ravens and they’ll pluck out your eyes’, stands tall for its powerful denunciation of Franco’s regime in particular and the devastating legacy of fascism in general. Saura’s political allusions were indelibly put forth through this somber, haunting and deeply affecting portrayal of grief, mortality, marital breakdown, loss of innocence and a very serious adult world, through the eyes of a perceptive kid, and is bound to remind one of Bergman’s Fanny & Alexander as well as the other renowned Ana Torrent film Spirit of the Beehive. 8-year old Ana, growing up in a gloomy mansion, cut off from the rest of the world, in the company of her elder sister Irene (Conchi Pérez), younger sister Mayte (Maite Sánchez), their caring housekeeper Rosa (Florinda Chico), disabled grandmother (Josefina Díaz) and icy aunt (Mónica Randall), is convinced that her father (Héctor Alterio), a stern, philandering and chauvinistic officer in Franco’s army, is responsible for the death of her cancer-stricken mother (Geraldine Chalpin – she also played the older Ana), and intends to avenge her death.  Saura made complex use of non-linear flashbacks, and veered between real and dreams, for this profound, fascinating and disconcerting meditation on memory, repression and guilt, both personal and collective, and was aided in equal measures by the fine performances led by the cherubic Torrent, the austere cinematography, and the melancholic score that alternated with the lilting pop hit ‘Porque te vas?’. 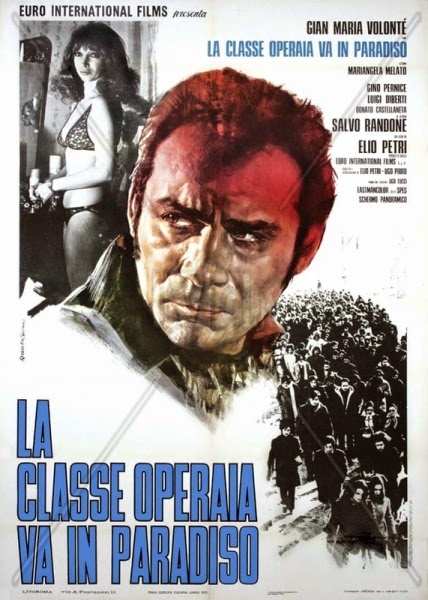 The 2nd chapter in Elio Petri’s ‘Trilogy of Neurosis’ following the excellent Investigation of a Citizen above Suspicion, The Working Class Goes to Heaven was a highly divisive film on account of its untempered, cynical and downbeat commentary on workers’ conditions. On one front it garnered appreciations for its temerity and radical stance, while on the other it earned the wrath of some for its blistering agitprop filmmaking and its savage portrayal of all concerned – not just the high-handedness of the authority, but also self-centeredness among the unionists, short-sightedness within the labour class and their perpetual friction with activists. Lulu (Gian Maria Volonté), the best worker in the plant, is hated by his colleagues because of his high productivity; he’s oblivious to the discomfiture he’s causing to those who can’t match his standards and basks in the bonuses that he earns through his machine-like dedication. However, while recuperating from an accident, he experiences a dramatic shift in his political consciousness, and by the time he rejoins work, he has become the single-most vocal and alienated employee. His potency, or lack thereof, reflected through his volatile relationship with his unsatisfied wife, provided the perfect allegory for the film’s point of view, while his delicate liaison with the vociferous agitators outside the plant added to its caustic perspectives. The characters were always hollering which made for a jarring experience, while the film’s propagandist nature was too obvious, but the tar-black depiction of the uneasy troika of management, unionists and activists, within which the regular blue collar workers are stuck, made for incendiary viewing. The grimy and gloomy workers’ condition was also aptly captured. 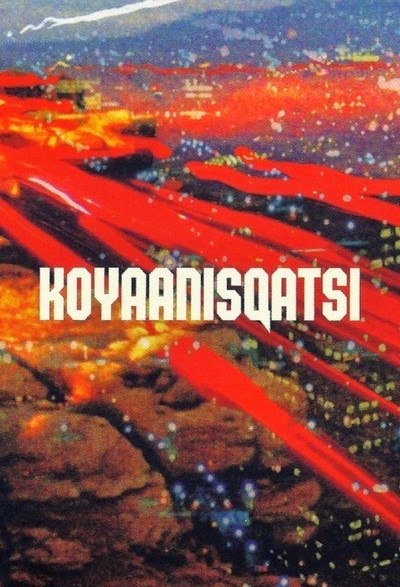 Godfrey Reggio spent 7 long years to make Koyanisqatsi, the first and the most famous chapter in his ‘Qatsi Trilogy’, and which translates to ‘life out of balance’ in Hopi language, with a paltry fund and sans any script. The deeply experimental and formally radical work reminiscent of Dziga Vertov’s Man with a Movie Camera, which became a sensation in the arthouse circuit upon its release, was a visually enthralling and emotionally disquieting commentary on the flip side of modernization. Though bereft of characters and dialogues, it had a distinguishable narrative structure that captured Regio’s leftist politics in no uncertain terms. It begins with shots of breathtaking environmental beauty, gradually progresses towards human interventions in the form of industrialization and technological advancement, and their jarring juxtapositions with natural landscapes, follows that with images of insatiable urbanization, and finally ends with vignettes of ageing, loneliness and impoverishment despite all the “progress” than humankind has made. The tonal shifts – from peace, lyricism and wide-eyed amazement, to moody ominousness, growing anxiety and palpable edginess, to finally quiet melancholy and weariness – were brilliantly evoked through the thematic underlining of the images, photographed using a plethora of techniques (overhead shots, close-ups, multiple film speeds, overlap of images, etc.) by Ron Fickle, and the haunting orchestral score by Philip Glass accompanying the proceedings. The fact that, despite the avant-garde nature of the film and the limited budget with which it was made, the audio-visual elements were so seamless integrated with the decidedly pro-environment agenda, is truly worth being mesmerized by irrespective of whether or not one agrees with Reggio’s socio-political stance. 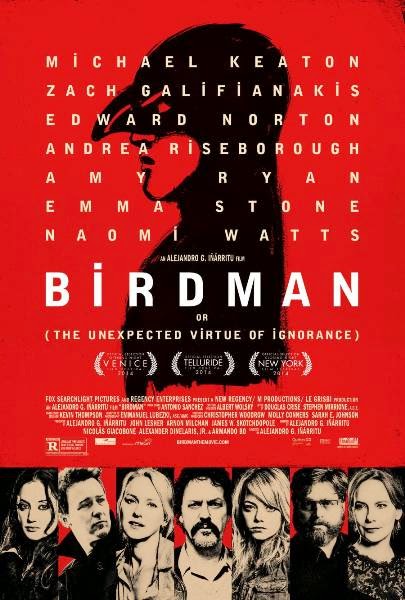 Birdman is, primarily, a character study on a man’s fervent attempts to reclaim lost glory and a scathing media satire on the desperate attempts of showbiz stars to remain relevant; and, in its darkly humorous portrayal of an actor for whom the line between his silver screen persona and real self has been completely blurred, it managed to be a superhero film too, albeit on a subterranean level. Riggan Thomson (Michael Keaton), who had once attained immense popularity for playing Birdman, is now a washed up actor perennially haunted by the superhero’s brooding presence. In real life, he’s a fumbling man who seems to be losing his sanity, while his alter-ego is an angry, venom-spewing person with telekinetic abilities. In a rather grotesque attempt to earn respectability, he’s decided to direct and act in a play for Broadway, and he’s joined in this endeavour, which borders between ambition and folly, by an acclaimed but egotistical actor (Edward Norton), a neurotic actress making her Broadway debut (Naomi Watts), his best friend and confidante (Zach Galifianakis) and his estranged, self-centered daughter (Emma Stone), among others, leading to both frictions and reconciliations. The film has been shot in a seemingly one continuous take, broken only by a montage sequence near the end, which was breathtaking in its audacity and technical virtuosity. Keaton gave a career defining performance as the complex-ridden protagonist – the fact that he’d starred in Batman and Batman Returns over 2 decades back, added a sharp self-reflexive touch bordering on wry self-parody to the film, heightened by Birdman’s close resemblance to the caped crusader and its gruff voice which provided a jab at Nolan’s reboot of the DC Comics franchise.