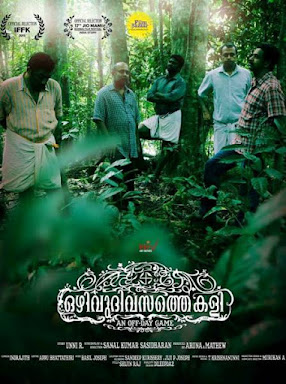 The Malayalam movie Ozhivu Divasathe Kali, Sanal Kumar Sasidharan’s adaptation of an Unni R. short story, is a classic buddy film on surface, given how it’s largely about a booze-fuelled day trip by five middle-aged Kerala friends. Yet, three facets established very early on its brutally savage political commentary – cacophonous pre-election rallies by political parties that it started with; a sequence where four of the friends, taking a break from the election hullabaloo, are joined in their drinking binge by a fifth guy who’s wary of being seen consuming alcohol, on account of his higher caste (who’re typically associated with abstention and vegetarianism); and their getaway takes place on the day of the voting. The five men symbolically represented different social strata – the aggressive Dharman (Nishthar Sait) who works in the Gulf, the sexist Ashokan (Arun Nair), the afore-mentioned Brahmin man Thirumeni (Girish Nair), the comparatively progressive and liberal-minded Vinayan (Pradeep Kumar), and Dasan (Baiju Netto), who possibly belongs to the historically oppressed Dalit community and which is regularly insinuated by highlighting the colour of his skin. As they get increasingly sloshed, they start openly leching after the local woman (Abhija Sivakala) who’s there to cook for them, certain old grievances start coming to the fore, and some of them start revealing their true colours, eventually leading to a shockingly horrific climax. While subtlety probably wasn’t a strength here, Sasidharan’s confrontational approach – he neither softballed nor minced words – made for a ferocious indictment on how casteism, misogyny, patriarchy, bigotry and glibly reactionary attitudes have been normalized among large swathes of India’s middle and upper middle-class social milieu. The film’s improvisational style further heightened its stark naturalism. 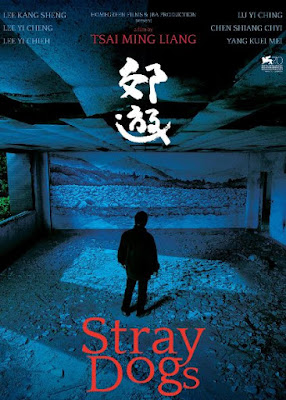 The films of Taiwanese auteur Tsai Ming-liang – an undoubted master of slow cinema – has always steadfastly focused on the dispossessed, the disenfranchised and the marginalized, and therefore on people literally living in the edges of a über-modern, late capitalist Taipei. And, like the thematic connectors, the stylistic, aesthetic and tonal palettes of his films too have often been distinctively identifiable. All these elements where there in ample measure in the bleak, edgy, alienating, ultra minimalist and deadpan Stray Dogs – Tsai’s 10th, and allegedly final, film. The movie is centered on a single father (a brilliant Lee Kang-sheng continuing with one of the most iconic director-actor collaborations), who stays in an abandoned building with his two kids – a little girl (Lee Yi-chieh) and her elder brother (Lee Yi-cheng) – and he earns a harsh livelihood as a human sign-board on the city’s sidewalks; what could be a more pungent irony than that he resides in a deserted, dilapidated dump while advertising for real estates that he couldn’t possibly afford even in a thousand years. They survive on free giveaway meals and clean themselves in public toilets, and yet, despite their extreme impoverishment and existential disillusionment, they are a reasonably contented close-knit little family. In an interesting artistic choice, and a tad intriguing one, there’s a mysterious woman too in the mix who could either be the kids’ current or estranged mother, and who’s played by three separate actresses who’ve all been regulars in Tsai’s films (Yang Kuei-mei, Lu Yi-ching, Chen Shiang-chyi). The endless stasis in which the characters’ exist were amplified by the extreme unhurried pacing, long moments of obtuse silence and stunning long takes shot largely using a static camera.

Herzog’s somber, mournful and moving documentary Into the Abyss – filled with empathy, moral conviction and humanism – reminded me of Capote’s devastating non-fiction masterpiece In Cold Blood, in that both provided powerful, holistic meditations on the cyclical nature of violence, the banality of crime, and the profound immorality of capital punishments. Herzog structured it along the veins of a book divided into interlinked chapters, with each focusing on specific sub-episodes and themes, which in turn provided multi-perspective view on the central crime, along with broader commentaries on its repercussions and ramifications. The case in question is a 2001 triple homicide wherein two young guys – Michael Perry, who’s on death row for the crime, and Jason Burkett, who narrowly escaped lethal injections and received life imprisonment instead thanks to a plea by his father who’s himself serving life – murdered middle-aged Sandra Stotler in order to steal a red Camarro, and also her son and his friend to get access to their affluent gated community for the said theft. Herzog conducted emotionally wrenching interviews with all the key people involved and impacted – the perpetrators, including with Perry just 8 days prior to his execution; those closest to him, viz. Perry’s brother, Burkett’s father, and his wife who he met and married while behind bars; and Sandra’s grief-stricken daughter who lost nearly everyone close over a very short period. And, while the cop who investigated the crime provided detailed account of what’d transpired, the interviewees also included – given the broader topic of state-sponsored murder – an anguished chaplain who listens to final confessions of condemned convicts, and a former captain who just couldn’t take it any more after facilitating in 125 executions. 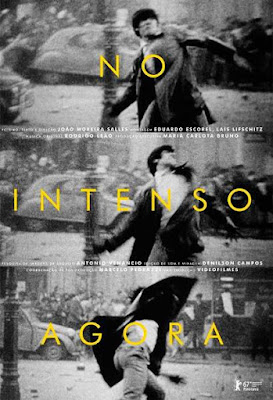 The 60s, and 1968 in particular, was a heady, tumultuous and electrifying time in the way it was rocked by defiance, counterculture and revolutionary fervour against the established orders. João Moreira Salles captured a subset of that in his enthralling, meditative and blazingly impressionistic cine-essay In the Intense Now. Through a mix of amateur footage, archival reels, film clips and home video, he crafted a formally radical work that conflated broader historical and political forces with personal reflections and memories. It covered four different episodes in parallel – the epochal May 68 Paris protests that started with labour strikes and transitioned into a massive student movement against the de Gaulle government, and in turn against reactionary forces in general; the thudding end to the Dubček’s Prague Spring by the arrival of Soviet tanks on Wenceslas Square, and Jan Palach’s tragic self-immolation soon after; the eruption of public anger in the streets of Rio upon the death of a young guy killed by the police; and unearthed footage – the least overly political and the only ones in colour – of his mother’s visit to China in ’66 during the Cultural Revolution. Various fascinating and even idiosyncratic aspects of the May’68 protests were captured, including Cohn-Bendit’s stardom, class and gender divide within the euphoric protesters, quirky political graffiti, divergent attires of opposing camps, etc. Other moments of brilliance included the stunning act of silent dissent by an unknown Prague documentarian, juxtaposing his mother’s apolitical nature with propaganda slogans across Beijing, the striking image of a solitary crying woman in the funeral march in Rio, etc. They were accompanied by the director’s poetic voiceover, pulsating evocation of the zeitgeist, and evocative use of music. 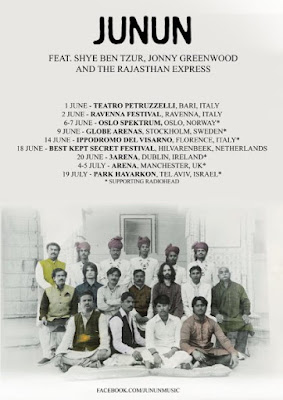 In 2015, Israeli musician and singer Shye Ben Tzur, and Radiohead guitarist Jonny Greenwood (he’s composed soundtracks for 5 of Paul Thomas Anderson’s films as well) collaborated with an eclectic Indian ensemble named here as the Rajasthan Express – comprising of a troupe of Qawwali singers and musicians, a brass band the kind of which is popular in many Indian weddings, and even certain archetypal instrumentalists from the Manganiar community – at the stunning Mehrangarh Fort in Jodhpur, Rajasthan, to cut an international fusion album called Junun. PTA accompanied the team in this fascinating musical and cultural adventure, and made this delightfully engaging and freeform diary film capturing fragments of their rehearsals and recording process. Songs – in Urdu, Hindi and Hebrew – and instrumental performances – covering guitars, trumpets, trombones, harmoniums, dholaks, sarangi, kamaicha and whatnot – gave it the stirring feel of watching a “live” jam session, and an absorbing one at that. However, while that formed its key aspect, the director also captured a number of humorous and idiosyncratic moments – the aspect that many practices in the Indian subcontinent, from playing an instrument to feeding meat to soaring eagles, are passed down from generations; pigeons refusing to leave the recording space; fickle nature of electricity; the joy of improvisation; etc. – along with dramatic aerial shots of the fort and the city, as well as vignettes of the streets and shops. Anderson was clearly more interested in capturing the experience and the ambience in this decidedly carefree production, and he also had careless fun along the way, like filming stray shots, impromptu movements of the camera in the middle of takes, etc. – things one’d never expect from a filmmaker as meticulous as him.