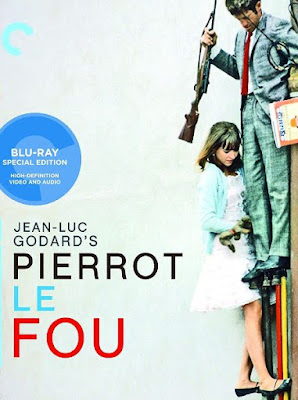 The anarchist, non-conformist, prankster, satirist, cynic, romantic and mad genius residing within Godard were all on dazzling display in Pierrot Le Fou – his exuberant, impudent, goofy and crazy gem. He took the template of outlaw lovers – or, in his words, the “the last romantic couple” – on crime spree, and deliriously punched into that pop-art aesthetics, wacky humour, comic-book violence, idiosyncratic genre subversion, sardonic class commentary, hilarious satire on consumerism, lacerating indictment on militarism, and a whole lot of manic fun, thus making this a dizzying mosaic packed with political, cultural, cinematic and literary references. That his marriage to Anna Karina was falling apart, added a poignant touch to their fifth and penultimate collaboration. Ferdinand (Jean-Paul Belmondo) – a media exec leading an unfulfilled bourgeois existence filled with ennui, domesticity and shallow social circles, and married to a well-off wife (Graziella Galvani) who’s consumed by vacuous consumerism – takes off on a whim with Marianne (Karina), his ex-girlfriend and member of an underground racket on the run from OAS gangsters. They steal cars, commit murders, swindle, and engage in subterfuge as they ride drive Paris to Côte d’Azur in search of escape and idyll. Along the way they encounter dwarf criminals, perform a couple of infectious musical sequences, make buffoons of American GI’s through a parodic agitprop street theatre on the Vietnam War, etc. Belmondo as the deadpan and philosophical Ferdinand, and Karina as the enchanting and impulsive Marianne, made for an unforgettable pair in this zany work flamboyantly photographed by Coutard. American filmmaker Samuel Fuller, in an ironic cameo, mentions “cinema is like a battleground”… Godard emphatically espoused that maxim here, and made it his raison d'être over his radical career.
Note: My earlier review of the film can be found here. 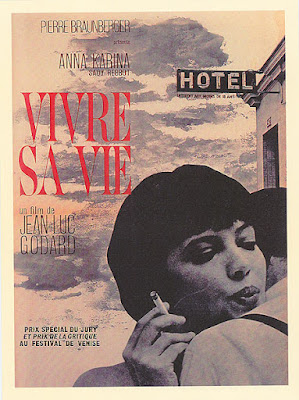 Vivre Sa Vie – with its desolate realism, melancholy and pathos – possibly ranks among Godard’s most solemn, understated and restrained works. Yet, it was also splendidly suffused with wry ironies, socio-political jabs, Brechtian technique, metatextuality, detours and dazzling narrative ingenuity – and this interplay between aesthetics, form, structure, themes and political undercurrents made this a work of rare beauty, depth and bravado. Broken into twelve tableaux – each beginning with an intertitle reminiscent of pre-20th century literature – it chronicled the life of the lovely and lost Nana (anagram of Godard’s muse and the film’s effervescent heroine Anna Karina), who wishes to escape from her dreary existence. She therefore breaks off her marriage and quits her job in a record store, dreaming of becoming a movie actress, but ends up as a prostitute on the streets of Paris. Godard interspersed her poignant, edgy and doomed journey with sublime moments, droll interludes, rich literary allusions and bravura filmmaking. In an iconic scene Nana is captured in a heart-breaking close-up as she watches Falconetti in Dreyer’s The Passion ofJoan of Arc; in another unforgettable sequence, she lets herself loose through a carefree dance to a pulsating jazz score in a pool room; the murder of an Algerian protestor being shot at by the French police is juxtaposed with a bravura jump-cut montage; the film’s elegiac score is often stopped without a cue; French prostitution laws are detailed in a deadpan voice akin to an educational newsreel; Truffaut’s Jules and Jim is shown playing at a Paris cinema; Baudelaire’s translation of Poe’s writing being read out by Godard’s voiceover; a long sequence where renowned philosopher Brice Parain answers Nana’s questions on language, love and whatnot. 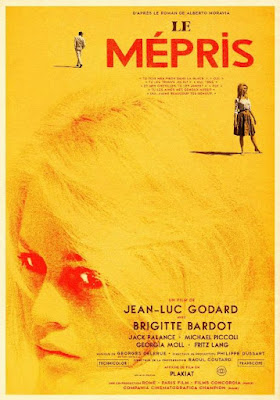 Godard’s breathtaking, sensuous and fierce masterpiece Le Mépris was packed with cinematic references and straddled multiple dichotomous facets. Adapted from Moravia’s commanding and ferocious novel Il Disprezzo, this smouldering examination of marital disintegration, artistic integrity, and filmmaking was simultaneously suffused with decadent classicism and blazing modernism – aesthetically, thematically and formally – while positing commentaries on modernist interpretations of classical texts, cinematic grammar – interlacing the lush, sensorial and opulent melodrama of Old Hollywood with deconstructive, subversive and radical avant-garde elements –, and overlaps between truth and artifice. Coutard’s resplendent cinematography – delineated with bold primary colours, interplays between intimate close-ups and sumptuous wide-angled frames, and glorious tracking shots –, Georges Delerue’s deeply elegiac score, and co-existence of immaculate mise-en-scène with montages, likened it to the Greek tragedy that formed here – as in the source novel – the focal point for both the plot and broader thematic explorations. Paul (Michel Piccoli), once an independent playwright, has been lured by easy money from writing movie screenplays – ostensibly to provide a luxurious life for his ravishing wife Camille (Brigitte Bardot), but essentially manifesting his self-delusion, hypocrisy and artistic decomposition. Things get dramatically complicated when he takes a job from vulgar, overbearing American producer Prokosch (Jack Palance) to rework the great Fritz Lang’s allegorical adaptation of Homer’s Odyssey into a mainstream costume drama. Meanwhile, the couple’s marriage unravels over the three-act structure, as the underlying malaise and disaffection reaches irreconcilable proportions during the brilliant mid-section staged within their apartment, and gets sealed during their trip to Capri where the filming is underway. This mesmeric work – right from the voyeuristic opening sequence drooling over Bardot’s body to the fatalistic climax – was therefore at once exultant, ponderous and disquieting. 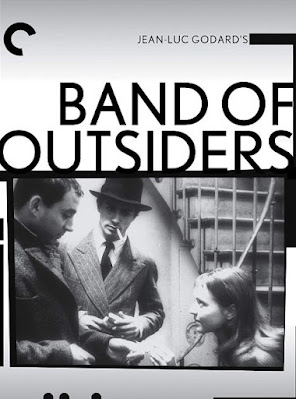 Godard made a euphoric return to the world of B-movies – the palette for his seminal debut feature Breathless – with Band of Outsiders, his 6th film in 4 years. This quirky, funny, playful and irresistibly infectious work – filled with ingenious interludes and asides, and wry pastiche to American genre cinema – formed a lovely companion piece to Truffaut’s dazzling sophomore film Shoot the Piano Player, in that both were eccentric adaptations of pulpy hardboiled novels – Dolores Hitchens’ Fools’ Gold and David Goodis’ Down There, respectively –, and they effortlessly juxtaposed bleak and downbeat poetic realism with remarkable stylistic bravado and nonchalance. This slacker crime caper revolved around two guys – the sincere and straightforward Franz (Sami Frey), and his cynical and raffish buddy Arthur (Claude Brasseur) – vying for the same girl, viz. the vivacious, coquettish and doe-eyed Odile (Anna Karina), who they’re trying to have as a partner-in-crime in their plan to rob the large stash of cash which, as per her information, can be found in the building in a grimy Parisian suburb where she resides. Things, unsurprisingly, don’t go as planned, which was twice over here on account of its post-noir sensibilities and its maverick director. The latter aspect was especially noteworthy thanks to inspired sequences which’ve become part of cinematic folklore – Franz and Arthur’s faux recreation of Pat Garrett shooting Billy the Kid; the troika’s seductive and melancholic “Madison dance” in a nondescript café; their celebrated mad dash through the Louvre – and myriad other irreverent interjections, like the minute of silence, Karina breaking the fourth wall with the rhetorical question, “why a plot?”, etc. Michel Legrand’s terrific jazz score and Coutard’s melancholic B/W photography added to its roguish charm.

Note: My earlier review of this film can be found here. 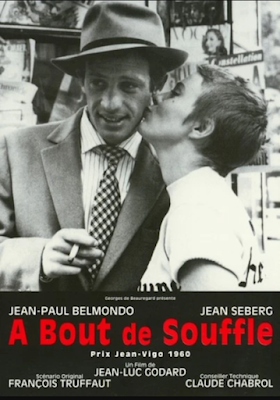 Like someone once eloquently surmised Godard’s scintillating debut – which became the Nouvelle Vague’s manifesto and, alongside The 400 Blows, its most influential work – “there was before Breathless, and there was after Breathless.” Free-form, improvisational, impudent, iconoclastic, exhilarating, and a stunning volte-face to conventions, it heralded its defiant and non-conformist auteur’s transition from theory to action. It was based on a story by his former Cashiers du Cinema comrades Truffaut and Chabrol, which he radically reworked and wrote the script on the fly, even feeding lines to his actors from behind the camera; this was his first of many unforgettable collaborations with Raoul Coutard who made extraordinary cinematographic innovations during its making, and shot a number of remarkable single takes, including an astonishing double full camera rotations in a cramped interior space while following two people from the streets to inside, and the famous climactic tracking shot; the film’s initial cut clocked two hours, prompting Godard to slice between scenes, thus leading to its legendary jump-cuts… anecdotes about the film remain as spellbinding as the film itself. Godard took French cinema to the streets of Paris, and displayed his love for American B-movies – gangsters and noirs – in this jazzy romantic noir with a fine score by Martial Solal, involving Michel (Jean-Paul Belmondo), an insouciant car thief who loves emulating Bogart and is on the lam after killing a cop, and Patricia (Jean Seberg), an alluring and enigmatic girl-woman whose introduction – hawking New York Herald Tribune on Champs-Élysées – remains one of the most recognizable sequences in cinema. Melville, in a deadpan cameo, ironically quipped that his greatest ambition was “to be immortal, and then die” … well, Godard achieved exactly that. 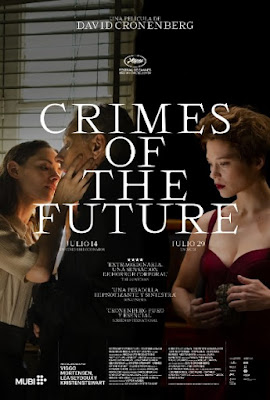 While watching Julia Ducournau’s gloriously seductive body-horror film Titane, one hoped for one last hurray from Cronenberg who’d once made this sub-genre his personal fiefdom and engendered the Cronenbergian grammar. Hence the Canadian auteur’s fabulous new film Crimes of the Future – albeit, conceived and written in the late-90s and was slated to go into production in early-2000s, before it got shelved for the next two decades – and his first in 8 years, felt especially exhilarating for its gleeful, provocative and ballsy evocation of his quintessential brand of outrageous, discomfiting, visceral and caustic social, cultural and biological commentaries in the veins of Videodrome, The Fly, Dead Ringers and Crash. Bearing the same title as his sophomore film but without any resemblances otherwise, it captures a dystopian future when human bodily evolution has moved into uncharted territories where pain and infection are a thing of the past; new human organs are spouting out of nowhere and “surgery is the new sex”, leading to both edgy performance art and increased body control by the state; dietary habits have got radically altered – with an underground anarchist cult feeding on industrial plastic –; and the society has shaped into a battleground between the surveillance state and subversive non-conformists. In this disturbingly allegorical milieu, the story focussed on the tantalizing ménage à trois between a renowned performance artist couple – Saul Tenser (Viggo Mortensen), a brooding man having “accelerated evolution syndrome” and his sensual partner Caprice (Léa Seydoux), who performs “live” surgeries on him – and saucy National Organ Registry bureaucrat Timlin (Kirsten Stewert) who’s secretly enamoured with Saul. The boldly grotesque visuals, hallucinatory atmosphere, and pulsating techno-classical score brilliantly complemented Cronenberg’s prescient, subversive and satirical vision.