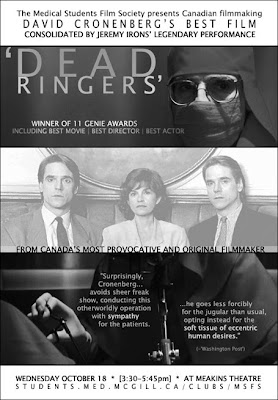 Made right after the tremendous commercial success he received for his remake of The Fly, Dead Ringers remains a creative high-point in controversial Canadian filmmaker David Cronenberg’s career. Cronenberg’s fixation with the grotesque side of human psyche was furthered in this intensely disturbing tale of two identical-twin brothers – the aggressive and suave Elliott and the introverted and sensitive Beverly, both renowned medical practitioners in the field of gynecology. Their radical breakthroughs in their field, however, obscure their shocking, even scandalous, personal “conquests”. However, when Beverly falls in love with an overtly promiscuous actress, his life starts falling apart courtesy clinical depression and addiction to prescription drugs; and with their eerie sense of equilibrium destroyed, it is a now matter of time before Elliott too gets sucked into the void of insanity. The movie is a relentlessly dark, brooding, unsettling and emotionally disquieting study on identity, perversity, misogyny, mental disintegration and raging madness. And at the forefront of this chilling and compelling tale of psychological terror, lies the virtuoso and devastating performance of Jeremy Irons as both the brothers, achieved through terrific use of SFX that set a benchmark for films portraying identical twins.

Cronenberg consistently makes fascinating movies by virtue of sticking to his guns. His obsession with body horror has given us some of the finest horror films of the last thirty years and this is definitely one of his best.

Absolutely. He certainly is one of the best directors in the world. The fact that he has sobered down considerably in terms of gore-quotient also means that his films now reach a wider audience than ever before. Thanks for stopping by.

This is my personal favorite Cronenberg film, though I like THE HISTORY OF VIOLENE and SPIDER almost as much. jeremy Irons is indeed stupendous, and you have again nailed this film with this economical, albeit brilliant coda:

Thanks a lot Sam. Yes, it would rank alongside History of Violence & Spider as one of my favourite Cronenberg films too.

This is one my favorite Cronenberg film.I have seen it so many times and really liked the whole story line. He is one of the best directors who makes fascinating movies.The Crazies Movie

Thanks Neetu. Yeah, absolutely, I completely agree with you.