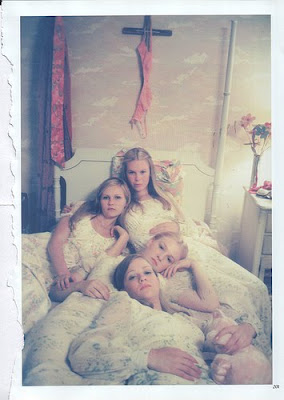 As coincidence would have it (or was it pure coincidence?), both Sam Mendes and Sofia Coppola made their respective feature film direction debuts in the same year, with Y2K fever raging in full throttle, with dark suburban dramas repudiating the American Dream – American Beauty and The Virgin Suicides, respectively. The latter film, directed by the great Francis Ford Coppola’s daughter, is a disturbing yet emotionally affecting tale of teenage alienation, repression, rebelliousness and insecurity; in other words, this is the polar opposite of the kind of inane teenage (or, chick) flicks that American producers like to flood the market with. The film begins, on a year in the 1970’s, with 13-year old Cecilia, the suicidal youngest daughter of the family, taking her life on her second attempt. And that sets in motion a self-destructive chain reaction whose repercussions result, approximately a year later, in the mass-suicide of her four older sisters at the film’s shocking climax. Told through the voice of one of the four young boys infatuated with the girls, the film is filled with a deep sense of nostalgia and melancholy throughout its smoothly paced length. The acting is first rate, with the then-young Kirsten Dunst providing a frighteningly matured performance as the promiscuous but inwardly fragile Lux, the youngest among the four remaining sisters.

Feels like watching it...just because of you Shubhajit..to me you excel as a writer and i look forward to read your reviews, coz the way you write them with such finesse...:)

Thanks a lot for the complements Priya, it sure has made my day :) I do what I can, and let my love for this medium do the rest. And yes, do watch the movie, and let me know how you like it. Looking forward to seeing you more often at this humble place of mine.

Striking thing about VS was that the VO came from a non-specific peripheral character as if being told in some sort of group session (reinforced by adult Trip Fontaine's little bit).

I thought it was such a wonderful way to tell a story. Like if GoodFellas was narrated by Henry Hill's brother in the wheel chair.

That's nice observation there. Yeah, now that you mention, I too feel it could very well be possible that even the other boys, like Trip Fontaine, are having to go through sessions to get over their obsession with Lux, in particular, and the Lisbon girls, in general. Even though the person in VO seems far mellower, the infatuation bit is still strongly palpable - as if he can't ever get this memory out of his system.

"The latter film, directed by the great Francis Ford Coppola’s daughter, is a disturbing yet emotionally affecting tale of teenage alienation, repression, rebelliousness and insecurity; in other words, this is the polar opposite of the kind of inane teenage (or, chick) flicks that American producers like to flood the market with."

Aye Shubhait! Excellent framing there. I rate this as Ms. Coppola's best film, as I could never understand the love for LOST IN TRANSLATION. This maiden effort, free of pretentions, is a harrowing study that has held up since it was first released, methinks.

Thanks Sam. I'm with you on this all the way. I too really never managed to get the hullabaloo behind Lost in Translation, perhaps I need to watch it again. But this film was indeed a very assured debut for, and as you said, unpretentious film by the talented Ms. Coppola.

The thing about The Virgin Suicides I liked the most was its soundtrack, by the French group Air. Maybe it is because I watched this film after seeing Lost In Translation, but I feel like Sofia Coppola was only warming up here for her masterpiece.

An interesting comparison with American Beauty by the way! Both this film and American Beauty do share a similar theme exploring the darkness lurking underneath American suburbs, kind of what Lynch has been exploring all his career, especially with Blue Velvet.

Thanks Jani for sharing your views about this movie. I too liked the soundtrack. I'm not on the same page as regards Lost in Translation, I guess I must give it a second try given the adulation that precedes it.

As for the comparison I made, I found it rather strange that 2 such dark suburban & dysfunction tales, quite the opposite of the all-American success stories, released right at the doorstep of the new millennium. In fact the late 90's also saw the release of The Ice Storm. A Y2K paranoia perhaps?

Perhaps.. One could also say movies like The Matrix and Cronenberg's eXistenZ tapped more literally into the same paranoia.

Now that you say, I agree Matrix too is an illustration of that paranoia. As for the Cronenberg film, unfortunately I haven't seen it yet.

I get a lot more out of this film than I do out of American Beauty, personally. One feels like a graceful but rather glib take on a suburban midlife crisis - the other contains worlds, though it's far from perfect. I think Sofia Coppola is one of the great talents to emerge in the past dozen years, though so far Lost in Translation is her only masterpiece. I know Allan reveres it, and expect its appearance on the countdown to cause some waves - many despise the picture. But if you tune in to Coppola's frequency, there are few visions as intoxicating...

Thanks MovieMan. I of course love American Beauty, though I can understand if you're not as affected by it, quite akin to, I guess, my not getting much affected by Sofia Coppola's "masterpiece" Lost in Translation. But if I were to go solely by this film, I certainly can't deny about getting intoxicated by her visions.