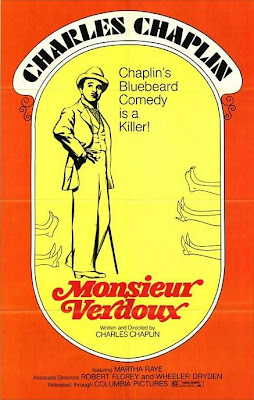 Monsieur Verdoux, though never canonized or anointed one of Charlie Chaplin’s best film, would nonetheless rank as perhaps the most singularly daring work of his filmmaking career. Released at a time when he was being witch-hunted for his communist leanings apart from facing personal (familial) crisis, Chaplin sounded the death knell for the beloved Little Tramp, arguably the most iconic character in the history of this medium, with this “comedy of murders” (based on an idea by Orson Welles). Where Welles was interested in a more conventional film on the subject, Chaplin turned the crime genre on its head by infusing it with tar black witticism, subversive humour and trenchant socio-political satire. Consequently, the movie, where Monsieur Verdoux, who can only be described by the moniker Chaplinesque, and brilliantly and inimitably played by the great man himself, goes about “liquidating” rich middle-aged women solely as a business proposition during the horrific times of the Great Depression, was too biting and ahead of its times for the audience to react favourably towards it. The film ends with the bleak pronouncement, “One murder makes a villain, millions a hero. Numbers sanctify”. However, despite its commercial and critical failure and the first major setback in Chaplin’s career, the film has fortunately and rightfully managed to get its due in terms of respect and adulation.

I wrote in my own review that I consider this Chaplin's greatest film with CITY LIGHTS a close second. I still hold to that opinion. a daring black comedy that was way ahead of its time.

Well, though Gold Rush still takes the top spot for me, this one is up there as well along with City Lights & Modern Times. Thanks John for sharing your love for this movie.

CITY LIGHTS, MODERN TIMES and THE GOLD RUSH are my own top Chaplins (and each of those rates among the greatets films ever made) but there is no question that this admittedly 'daring film' should be counted among his masterworks. In any case, as you rightly note, it was indeed his last truly great film, even with the elegiac LIMELIGHT to follow. That socio-political satire you speak of of course has to do with teh hypocricy of people to ccondemn domestic murder, but to then 'embrace' the mass-murders commited by their nation's soldiers in time of war.

I'll go with City Lights as Chaplin's best. It has been a while since I watched Monsieur Verdoux. I can't remember many individual scenes. I think I last saw it during my college days. This review of yours makes me want to search it out since I don't own a copy.....M.Roca

Thanks a lot Sam. Yes, I too would go with those 3 as Chaplin's best, though not necessarily in that order :) The satire on man's hypocrisy is indeed trenchant and biting. I'd go so far as to call it Chaplin's darkest and most misanthropic movie, though his films usually are far more humane than this. Of course, Gold Rush too was a pretty dark film.

City Lights vs Gold Rush debate is an unending one, though I guess I fall in the minority group on this one :) Yeah, do have another look at Monsieur Verdoux as I'd love to hear your views on it. Thanks for stopping by.