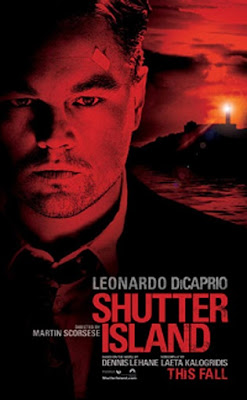 Dennis Lehane’s books tend to be ready-made recipes for dark, brooding movies, cases in point: Clint Eastwood’s and Ben Affleck’s Gone Baby Gone. This time around we have the little giant Marty Scorsese adapting a Lehane book for his . Scorsese sure must have had some fun while making this overtly plot-based movie filled with the kind of genre conventions, tropes and B-film sensibilities, even bordering on kitsch at times, certainly not reminiscent of the kind of masterwork that he is renowned for. But that certainly shouldn’t mean that the film is not enjoyable, rather far from it. Set on the eponymous island that houses a mental institution for the criminally insane managed by the mysterious Dr. Cawley (Ben Kingsley), former World War II veteran and federal Marshall Teddy Daniels (expertly played by Leonardo DiCaprio), who harbours some deep trauma from his past, is sent there along with his sidekick Chuck (Mark Ruffalo) to investigate the mysterious disappearance of a patient, completely oblivious of the shattering twists that await him there. The stylized photography, moody atmospherics, tight editing and fine acting do make for a fair share of thrills and excitements. However, despite the themes of guilt and redemption dominating the proceedings and the ambiguous ending, at the end of the day it remains nothing more than a tense and reasonably gripping entertainer.

"However, despite the themes of guilt and redemption dominating the proceedings and the ambiguous ending, at the end of the day it remains nothing more than a tense and reasonably gripping entertainer."

Could not disagree more on this. As I have been saying since watching it again, the movie actually works better once one already knows the mystery and is not so caught up in the shock value of it. It plays like a man's march right into the depths of a hellish nightmare. There are scenes that I think are nothing short of spectacular - the dream sequence, the face to face between Teddy and Noyce, the haunting murder of his family.

I can understand it being read as just Scorsese having genre fun, and in a sense this would be accurate. But I thought it was so much better than just an average mystery or thriller. I'm a Scorsese shill, but even with that in mind, I think it's the best movie he's made in years.

Hey, we can't agree on them all, so I have to go down championing this film!

When I saw Shutter Island in the movies I considered it an average Scorsese and nothing special. But Dave's belief that it works better once you know the mystery has me interested in seeing this one again, before I finally make up my mind on its overall worth....M.Roca

Thanks Dave for your impassioned championing of the movie. Scorsese, for me, has delivered his best when he hasn't been confined by genre conventions. Primal Fear, too, was a failure not because it was a bad movie per se, but simply because it didn't manage to scale the kind of standards that Scorsese has set for himself.

Similarly, Shutter Island was a reasonably fun watch for me. And like Aviator, the stylization has played its part in building the overall mood. However, the themes of guilt and redemption have been too obvious here as compared to his best works, though in that sense, the movie has seen him return to his roots if I might say so.

And yes, there's greater fun in disagreeing at times :)

Well same here, though my response to it was better than average. However, like you, I guess I too need to watch it again given Dave's opinion that it works better on second viewing. Or perhaps I should read the Lehane novel before that.

I think if Scorsese makes "reasonably gripping thrillers" for the rest of his career we should all be thankful. I've heard too many reviews branding Shutter Island as average but I think either people are expecting too much from Scorsese or that when the guy makes an interesting but straight-forward film it's just not Taxi Driver. Well, he's done the masterpieces, I'm quite happy to get The Departed and Shutter Island-type films from now on.

That's a great point you've made and I agree with you. Had this movie been made by a lesser director I might have even gone ga-ga about it. But coming from Scorsese, a man who's made movies like Taxi Driver, Mean Streets & Raging Bull, one doesn't tend to accept anything less than that. You might say that's the flip side of making such brilliant movies. However, that said, I did enjoy Shutter Island, though perhaps not as much as I enjoyed Departed. Thanks for visiting.

I liked it too.

Yep - I was a big fan of The Departed too.

I liked Shutter Island even though its critical reception wasn't great. I think the film built a great sense of dread and the set design was top notch. As long as you accept the twist from the beginning, it's a great ride.Shutter Island Sound Track

Thanks Neetu. Yes, the narrative buildup & set design were very good. It was a reasonably satisfying ride alright.

Having seen the film a second time I can concur with another reader that the film is even better on repeat viewing.