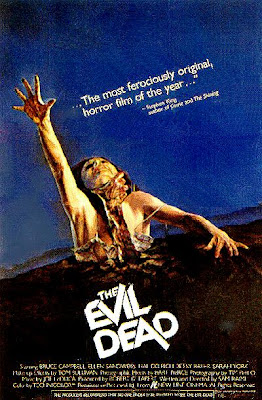 Though I’m not particularly fond of zombie flicks and gore fests, one can’t help but give The Evil Dead its due. One of those rare B-films that even mainstream audiences have watched, the infamous Sam Raimi debut feature remains a cult classic like few others and a landmark film of the 80’s. It begins with a low tracking shot that instantly sets the tone for the movie in terms of spatial disorientation and paranoia. And soon enough we are apprised of its plot that have become a cliché in American horror films – a group of young friends making a stopover at a cabin in the woods that can’t be anything but haunted by ghouls and evil spirits. The film and its sequel turned Bruce Campbell, in the iconic role of Ash, into a legend among B-film enthusiasts. However, what the film lacks in depth or weight, it more than makes up for that with its frenetic pacing, moments of genuine suspense and nightmarish atmosphere. And given its low-budget, the film is a testimony as to optimizing one’s resources through creativity. And as for preserving the spirit of its notorious genre goes, the film abounds in classic bad acting, cheesy plot developments and gleefully outlandish display of blood, gore and other not-so-precious bodily fluids. Yet, despite its schlocky and disreputable splatter film sensibilities, there’s no doubting the fact that Raimi must have had one hell of a fun time in conjuring this “Ultimate Experience in Grueling Terror”.

Aye Shubhajit! This is one rare exception in this sub-genre that really rocks.......and scares! The house-in-the-woods setting, and the ancient scrolls help establishing a brooding atmospheric underpinning for a hair-raising horror show, that yields more than a few jolts. I won't soon forget how I sacred my kids silly when I first show this to them years back. The sequels are impreesive too.

I just rewatched this a few weeks back and I was most impressed with how the effects and camera tricks still hold up 30 years later. I'm slightly impartial to the sequel, where Campbell gets to flex is comedy chops a bit more, but there's some debate to the fact that Raimi never has been able to top himself since this.

Sam, you must have had some sense of humour showing this film to your kids! Yeah, the stuff which have since become cliched worked very well in this film. Thanks for the appreciation.

You're right, a lot of people opine that this film was Sam Raimi at his best, though I guess the collective opinion would go in favour of your impartiality towards the sequel. I too watched the film after a very long time. Planning to rewatch and review the sequel as well. Thanks for stopping by.

Raw but brilliant would be my verdict. Evil Dead 2 (more a remake than a sequel) is better because Raimi concentrated on the tongue-in-cheek stuff, but you've got to give him credit for creating one of the most memorable cult flicks with such a limited budget and experience.

I'm absolutely with you on that Dan. Evil Dead & its sequel happen to be two of the most influential films from the 80's despite the limited budget and the B-film baggage. Maybe I'm not as big a B-film enthusiast as I ought to be, not yet at least :)