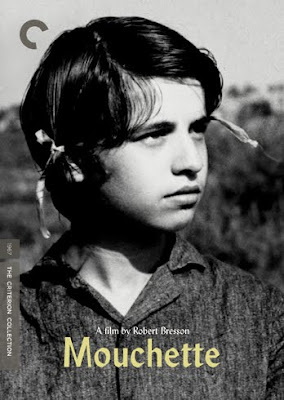 Watching Mouchette I couldn’t help but notice that this Robert Bresson gem has a number of similarities with his Au Hasard Balthazar – so much so that the two can almost be discussed in tandem. Not only was this also a minimalistic and emotionally challenging movie with religious undertones and powerful socio-cultural commentary and was shot in stark black-and-whites, its principal protagonist too is a deeply misunderstood and socially inept girl who digs a grave for herself through her own folly and misjudgement as regards to deciphering human nature. Interestingly, here too the girl suffers for getting close to, for the lack of a better word, the wrong guy. The movie’s titular character, played absolutely brilliantly and affectingly by Nadine Nortier, is a young lonesome girl whose job it seems is taking care of her ailing mother and her newborn brother. She is mistreated by her alcoholic father (who also happens to be a bootlegger), and has no friends at school. On one stormy night she makes acquaintance with a delinquent poacher, and what ensues makes the already marginalized girl’s life even more isolated. The movie’s portrayal of the complexity and absurdities that define human behaviour made it a truly profound, layered, quietly disturbing and deeply philosophical piece of work. And the sparse visuals made this downbeat story both lyrical and heartbreaking.

I'm with you Shubhajit and you framed it up perfectly. This is quite a devastating work and one of Bresson's best films. Glad you found some similarities between this one and Balthazar and I'm not sure I've ever thought that way per se but it really works you're right. Oh this film is really something and is as transcendent in its own way as it is depressing.

Thanks a lot Jon for the appreciation. Yes, this is a deeply affecting and at times even an emotionally work. And yeah, it was interesting to note the thematic and structural similarity between the two movies - this became a tad easier for me because I's watched Balthazar only a couple of weeks of so back as a result of which it was quite fresh in my mind while I was watching this.

This absolutely fantastic review (surely one of the best you have ever written) comes at precisely the right time for me Shubhajit, as I am in the throws of a comprehensive film festival at Manhattan's Film Forum, where every one of Bresson's 13 feature films ar ebeing screened. I watched MOUCHETTE this past Wednesday evening (January 11) in a beautiful high contrast print, which fully validates all the supern points you bring out about the film's stark and austere design. Ghislain Cloquet's work in this film and in AU HASARD BALTHAZAR (which I watched there January 6) is among the greatest achievements in the cinema. But you do a fantastic job delineating the film's sociological and psychological strains and of it's supreme artistry. As always the film affected me deeply for several days after I watched it. Yes, Nordine Nortier is extraordinary!

Bresson is one of my three or four favorite directors of all-time.

Thanks a lot Sam for the praise. I guess it becomes a tad easier to frame a movie if one has really liked it - as was the case for me with Mouchette. It certainly would find place among the great masterpieces of world cinema, and not just in the filmography of Robert Bresson.

Speaking of Bresson, you did mention about the Bresson film festival which you were planning to attend. It sure is a marvelous event, and I was quite certain then itself that you wouldn't miss this for anything. I can very well understand the kind of satisfaction you'd have received on watching the Bresson classics on big screen.

By the way, speaking of favourite directors, who all would make the cut in your Top 5 apart from Bresson?

Bergman and Chaplin change for #1 every week.

Thanks a lot for the fascinating list, Sam. It is filled with the names of some of the biggest giants of world cinema - and that clearly shows your incredible and eclectic viewing range. And yeah, Bergman and Chaplin fighting for the top spot does make a lot of sense :)