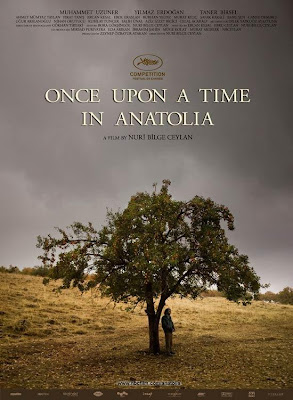 Acclaimed Turkish auteur Nuri Bilge Ceylan’s latest offering might seem a murder mystery as per its premise, but upon watching it I realized it’s anything but one. Though presented in the garb of a meticulous police procedural, this is, in essence, a meditation on the dichotomies of human nature, a commentary on the socio-political milieu of the Turkish society, and a wonderfully captured odyssey that is as much physical as it is psychological. Based within a span of a day, the movie starts off with a handcuff-bound criminal, who has already confessed to a murder, being taken around by the cops through the Turkish wilderness in order to locate the place where the dead man’s body has been buried. Soon enough we are introduced to the three world-weary principal characters of the storyline whose innermost psyches and carefully wrapped dark impulses have been finely delineated – a police detective (Yilmaz Erdogan), a public prosecutor (Taner Birsel), and a doctor (Muhammet Uzuner). The film is deliberately paced and is extremely verbose in nature; consequently, one might find it to be a challenging watch. However, if one manages to glean through the seemingly irrelevant conversations, one would find this to be a surprisingly perceptive, darkly comic and brilliantly enacted film for the way the director has subtly managed to capture the various layers and mindsets of the characters. Ceylan’s love for breathtaking outdoor shots would be well known to anyone who has seen his earlier movies like Uzak, Climates, etc., and that trend has continued here too, as we are presented with such extremely well-framed compositions that have made it a visual treat.

"Though presented in the garb of a meticulous police procedural, this is, in essence, a meditation on the dichotomies of human nature, a commentary on the socio-political milieu of the Turkish society, and a wonderfully captured odyssey that is as much physical as it is psychological."

I saw ANATOLIA during it's two week run at the Film Forum at the beginning of January, and found it a near-masterpiece. Perhaps with another viewing I'll remove the "near." You frame it's essence superlatively well, and the above passage superbly delineates it's artistry. I've seen two other Ceylan films, and I'd have to say this one is his greatest of all. Yes, it's talky and long and challenging at times to sit through, but it's start and arresting and it's sense of mystery captivating.

Thanks a lot Sam. For me too this is the 3rd tryst with Cylan (the other two being Uzak & Climates). Though, among the three, Uzak remains my favourite, this one would place not far behind. Yes, this is an arresting film - both visually & intellectually, and is a proof of the Turkish filmmaker's place among the finest contemporary filmmakers in the world.

Glad you saw and enjoyed Anatolia Shubs. Like you, I was struck by the fact that the movie was less a traditional neo noir and more a philosophical study about human nature. It has much on its mind and is an extremely well crafted film. I was completely taken by surprise when I went to see it at the Film Forum 24 hours after Sam did. I expected something that would stick closer to specific genre tropes, but instead witnessed a grander piece of art that was as magnificent as The Tree Of LIfe for me.

Other than the trailer I read very little about the film beforehand, and remember thinking that the seemingly invisible reception it received was almost criminal. That initial hasty assumption was quickly proven false though. Many bloggers around the net have actually confirmed the brilliance I felt I witnessed that night and have showered the picture with the kind of praise it surly deserves.....M.Roca

Thanks a lot Maurizio for stopping by here after a long time & posting your views. Its always a pleasure to hear from you.

I too am glad to know that you too liked Anatolia a lot, as have most serious cinephiles. Interestingly, I too had read very little about the movie beforehand apart from the crime drama angle. But, within a few minutes into the movie I realised that this is anything but a standard plot-based crime thriller, and that its agenda is far more profound & broad than that. Of course, having watched a couple of Ceylan's films before, this didn't turn out to be a big surprise though.

Perhaps as Sam mentioned above a second viewing will further elevate the movie in my eyes insofar as its artistic content & strength go.

I am still waiting for the good print of this movie on the torrent. Nice to see good review from you

Thanks man. Yes, do watch it, as I'm sure you'll like it.

We can call this movie as a bridge or as a milestone in Ceylan's career. It is as simple as that, there is a very obvious change in Ceylan's directing and writing after seeing that movie. Having seen that, we can make this comparison like Before or After Once upon a Time in Anatolia. It is not 'three monkeys' or 'the climates' or 'the distant', it is obviously another one that carries Nuri Bilge Ceylan's way of directing to the next level.