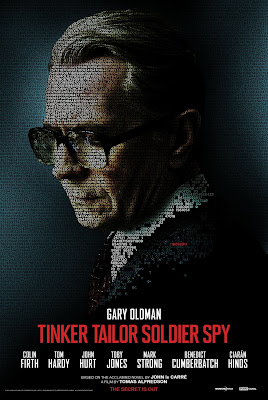 Tomas Alfredson, whose previous movie was the brilliant deconstructionist vampire tale Let the Right One In, changed his milieu from icy Scandinavian winter to gloomy British winter with Tinker Tailor Soldier Spy. Adapted from the famous John Le Carre novel, this Cold War-era thriller is a complete antithesis of the kind of slick and kinetic spy thrillers one is mostly accustomed to. Alfredson has been largely faithful to the source while bringing to screen the labyrinthine cloak-and-dagger tale of deceits, conspiracies and subterfuge populated with undercover agents and double agents grappling with a complex world order. The story is about George Smiley, one of Le Carre’s most famous creations, being compelled to come out of his forced retirement in order to conduct the hush-hush job of identifying a Russian mole who has infiltrated right into the top echelons of MI6, referred to in Le Carre’s novels as the Circus. Narrative inter-cuttings and frequent flashbacks have been made ample use of in order to present Smiley’s meticulous uncovering of the resident secret agent. Gary Oldman has given a pitch-perfect performance as the glum, detached, taciturn and world-weary Smiley, as has the series of talented character actors who are part of the exquisite cast. London has been portrayed here as a perpetually wan and gray urban jungle courtesy the moody photography, and like his earlier film, this too is rich in atmosphere and is leisurely paced in order to ensure a slow but compelling buildup to the climax. Further, excellent detailing in terms of the characters’ looks, attires, art decoration, texturing, etc. to present a fine zeitgeist of the era. The unspectacular nature of the proceedings, the dry tone and the inherent bleakness of the story might make the viewing experience underwhelming for some, but they worked very well for me.

I liked the movie, however there is a BBC series with Sir Alec Guinness playing George Smiley, which is in a league of its own. Do check that out if you get the chance.

Yes, I'm aware of the acclaimed BBC series starring Alec Guinness. In fact I'd initially planned to watch it before the movie. Nonetheless, I'll watch it sooner rather than later. Thanks Kogi.