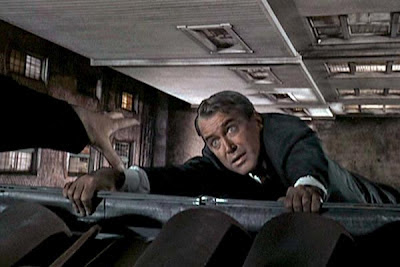 Rear Window, Vertigo and Psycho make for a superb trilogy – not just because the three were the best works of Alfred Hitchcock, they were also bound by the disturbing themes of voyeurism, obsession, and obfuscation of identity, and the classic Hitchcockian elements of slow suspense, MacGuffins, and the darker human shades and impulses dominating over the whodunit storytelling. James Stewart gave a sterling and quietly explosive turn as John “Scottie” Ferguson, a former cop with the San Francisco police department afflicted with acrophobia. When a friend from his past offers him a rather bizarre job of trailing his wife Madeleine (Kim Novek), he takes it up after some persuasion, but before long he finds himself falling for the seductive beauty of the icy platinum-blonde. However, after her shocking “suicide”, the debilitating psychological impact starts imploding him from within; and his rabid obsession with the dead woman (bordering on necrophilia) starts bursting off the seams when he has a chance encounter with an earthy girl bearing striking resemblance to her. One might argue over the director’s choice of revealing the twist well before the climax, but there’s no arguing the distressing, and disorienting effect that the movie possesses, brilliantly accentuated by its eerie tone, the intense psychological deliberations combined with its thematic underpinnings and dashes of surreal effects, great visual design and camera work (the seminal “vertigo shot”), and an excellent mood-establishing score. The scenes where Ferguson is silently trailing and observing the mysterious Madeleine through the city rank amongst the most compelling sections of the movie.

As Sight & Sound's best movie, I totally agree this is essential viewing. I originally has issues with Hitch revealing the twist before the end, but looking back I think it works in the movie's favor and makes us realize the twisted reality of Scottie's existence forcing us to continue watching him spiral into madness.

Yes, post the sensational release of Sight & Sound's latest poll results, I decided to revisit this Hitchcock classic (after a gap of many years). The twist being revealed well before the climax did disturb me a bit as well, and to be honest, I'm still not sure whether that was a good or a bad idea. Nonetheless, it does remain a fascinating work. Thanks for stopping by.

Nice write-up Shubhajit. I too am compelled to now go back and revisit this one and do a write-up as probably many others as well will do the same. It's been probably 5-7 years since I've seen it so I'm due. It is definitely one of the 10 best films ever made. Interesting that I was in a discussion with a friend last week who finds those scenes of Scottie trailing Madeline to be incredibly boring! I was dumbfounded. I find those scenes to be very intense myself and rather unnerving.

Thanks a lot Jon. Yeah, it was interesting revisiting it after many years - thanks to the Sight & Sound announcement. I'd last seen it during my school days (this, as well as quite a few other Hitchcock films were introduced to me by my dad). Interestingly, even I had a discussion regarding that sequence with a friend of mine (he was on the same page as us though).