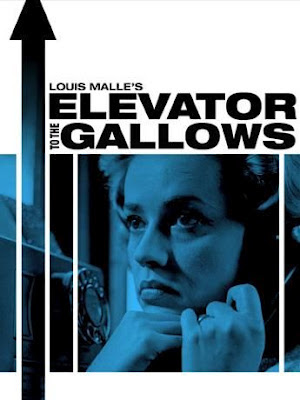 Elevator to the Gallows was a cracking and assured debut feature by Louis Malle, and a delightful concoction of American noir tropes with French sensibilities. The film has everything that a noir aficionado can crave for – extra-marital affair, coldly planned murder, unfortunate coincidences, doomed love affair, and a captivating urban milieu. The movie begins with a close-up shot of the incredibly gorgeous Florence (Jeanne Moreau) conspiring with her lover Julien (Maurice Ronet), a former paratrooper, over the payphone regarding their plot to murder her wealthy and powerful husband who, not surprisingly, happens to be Julien’s boss. Soon enough there is a zoom-out accompanied by a jazzy score, and immediately I realized that I’m in for an audio-visual treat. Julien goes on commit the most perfect murder that one can imagine. Unfortunately, he ends up making a silly oversight, and his attempt at correcting that inevitably sparks off a domino effect that can lead only to disaster for the adulterous couple. A delinquent youth and his naïve girlfriend play key roles in the incidents that unfold in this meticulously plotted film. Moreau, with her perfectly sculpted face and coldly enchanting demeanour, gave the film’s most standout performance. Despite the nihilistic theme and brutal irony, the movie felt more stylish and less fatalistic vis-à-vis its American counterparts with similar storylines like Double Indemnity and The Postman Always Rings Twice. Look out for an absolutely magnificent and quietly melancholic trumpet-based background score by none other than Jazz maestro Miles Davis.

Ooooh. One of my favorites here. This is a delicious film, not the least of which is due to Moreau. My goodness she's great here. Also love the camerawork and great Miles Davis score. This is what I call more a neo-noir, as the sensibility is quite different than more traditional noirs, as you mentioned. This despite the fact that it still was released within what most consider the end of the classic period leading up to Touch of Evil.

Great film,for me it's one of the most Hitchcockian films not made by the master himself,I wish Malle had made more of this kind.But if you check out the whole Criterion Collection Malle series,you will find his films are so diversified，I would say he is the most underrated director in the French New Wave period.

@Jon: Indeed Jon, this was quite a delectable watch. When I was watching it, I was immediately hooked on to the brilliant background score which later, to my surprise, I found out to be by the great Miles Davis. Yes, the fact that, despite being made in the classic Film Noir period its sensibilities are more in the tradition of neo-noirs or post-noirs (on account of its self-consciousness), makes this quite an interesting film to take note of and even study. Perhaps his being a film student who had devoured a lot of American film noirs during his student days could be attributed as a reason for this.

@David: Yes, some do say that this was the best movie that Hitchcock never made, though personally I found its style & sensibilities not really aligned to Hitchcock's films (at least with respect to the ones I've seen). And yeah, Malle apparently didn't like repeating himself, and hence he ended up making such diverse films over his career. Need to explore more of him.

The Miles soundtrack is certainly sublime and a major plus in Malle's first film. Even though Gallows came out at the tail end of the original noir movement in the US, I would also agree that it does feel more like a neo noir overall. Nice essay Shubs!!!...M. Roca

Thanks a lot Maurizio. Nice to hear from you after a long time. Yes, the Miles Davis score added melancholia and moodiness to the film and wonderfully complemented the breezy nature of the proceedings & the stylish filmmaking.

Miles Davis' stunning score has always led me back to this film, but in truth it is one of Malle's best early works, one as you know, that is stylish and audacious to the point where it's fatalism does indeed seem muted, especially when you compare it to some of the classics in that particular sub-genre. Moreau again is exceptional.

Thanks Sam. Yeah, this remains a superb neo-noir, and a fascinating film to watch more so because Malle made his debut with it. And Moreau was a treat to watch given what a marvelous combination of beauty, grace & acting prowess she was.