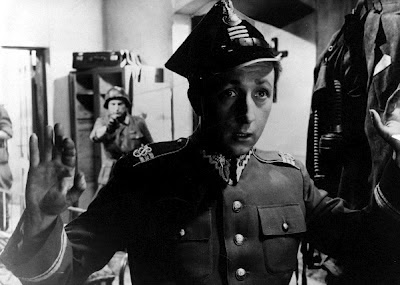 Andrzej Munk, who had made his debut with Man on the Tracks, which is considered as one of the best Polish films of the decade, reached the zenith of his maturity, talent and artistry with his third (and final completed) film, Bad Luck. Unfortunately for the world of cinema, he died shortly afterwords in a tragic car accident while in the middle of his fourth movie. Narrated in flashbacks, this incredible political satire had at its forefront the tragicomic tale of Jan (incredibly played by Bogumil Kobiela who’s in every frame of the film), an unremarkable and slightly stupid Everyday Joe whose chronic bad luck ridden life coincides with and forms a mirror to the turbulent contemporary history of Poland from 1930s to 1950s. He is a dangerously apolitical character whose sole intent in life is to earn fame, riches and the various ladies he falls in love with over the years, and thus his existence seemed hilariously anachronistic given the politically charged and dynamic times he lived in – be it World War II or Stalinist Poland. Munk brilliantly blended delectable humour with sulfurous jabs and pointed political commentaries, and made marvelous use of whimsical plot developments to carry the seemingly improbable faux-autobiography forward. The final result was not just a freewheeling tale of perennially being at the wrong place at the wrong time, it was also a deeply subversive (despite the refreshing sense of humour the superbly written script was filled with), darkly funny, and quietly disconcerting and melancholic piece of work. Jiri Menzel borrowed the template for his late-life gem I Served the King of England, as did Robert Zemeckis for the poignant Forest Gump.

Good comparative point with the comparison to I SERVED THE KING OF ENGLAND and even FOREST GUMP. This is another example of Eastern European cinema from that period that superbly blends satire with a dark and melancholy tone. terrific capsule review!

Thanks a lot Sam. Those two movies immediately came into my mind while watching this fascinating film. In fact, the completely apolitical protagonist who is not in the least concerned about the political upheavals around him also reminded my a bit about another Czech New Wave masterpiece, viz. Menzel's Closely Watched Trains.