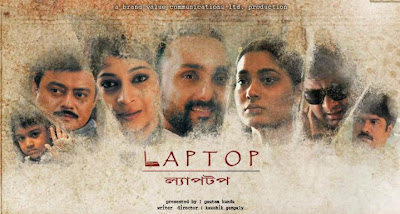 Kaushik Ganguly, who showed his prowess at deftly and sensitively portraying the various layers of human relationships and emotions in the brilliant Arekti Premer Galpo that he made a couple of years back, has proved with his latest venture, Laptop, that he’s enjoying a particularly creative phase in his filmmaking career. The basic concept used in this film, viz. an inanimate object changing hands and lives in the process, has been used in such diverse movies as Mann’s superb psychological Western Winchester ’73, Bresson’s masterly L’Argent, the compelling Italian drama The Red Violin, among others. The concerned object here is, as the title suggests, a stolen laptop. It makes its way through various people with diverse social and personal backgrounds – a poor taxi driver (Rajesh Sharma) in need of money for his wife’s surgery, a simple middle-class man (Pijush Ganguly) and his young son (Gaurav Chakraborty) who falls for the pretty daughter (Ridhima Ghosh) of a wealthy man that ends with heartbreak, a blind writer (Kaushik Ganguly, the director himself) whose relationship with his typist (Ananya Chatterjee) might just be veering beyond the professional boundaries, and a divorced publisher (Rahul Bose) who takes a trip to meet the son of a wealthy tea planter (Saswata Chatterjee) with tragic consequences. Coincidences play an important role in all the human stories, with urban loneliness and crave for companionship being the dominant themes. Though, admittedly, some of the subplots are better than the others, Ganguly bound them with soft hands, with the splendid background composition playing a vital role in accentuating the film’s underlying pathos and melancholia.

And I'd add THE EARRINGS OF MADAME DE to the list of memorable movies about inanimate objects changing hands through the narrative. Wow, you superbly frame this film from a narrative and thematic viewpoint, and it's most alluring. Again, I'll mark it down and hope the opportunity avails itself.

Thanks about mentioning that as I'm yet to see it. I shall add that to my pipeline of movies to watch. And yes, Laptop does make for a fine viewing experience.