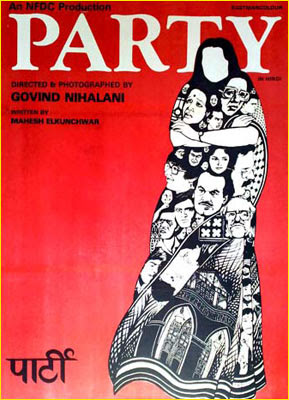 Made right after Ardh Satya, a powerful cop movie and possibly Govind Nihalani’s most famous work, Party was a searing social satire and remains relevant to this day. The movie, which belonged to the ‘Indian Parallel Cinema’ movement, is about the titular party thrown by a wealthy socialite in order to celebrate the winning of a prestigious prize by a famous playwright. A lot of people – poets, theatre actors, journalists, social activists, hack writers – belonging to various social strata and subscribing to divergent social and political points of view, have gathered, and the various interactions they have there form the crux of the storyline. But for a few initial scenes where the characters are briefly introduced, most of the film was shot in real time with varying amounts of time devoted to the motley characters attending the lavish party – and over its course, we get to know them, and are also made aware as to who among them are the genuine ones and who all are essentially hypocrites desperately trying to project themselves under the guise of false pretenses. Though highly engaging, and in equal parts bitingly satirical and intensely serious, it did seem a bit overlong, especially during some of the rather lengthy conversations during the last third of its length. But, that apart, this remains a prescient and incisive social commentary, and boasts of a number of noteworthy turns by its stellar ensemble cast comprising of the likes of, Amrish Puri, Om Puri, Rohini Hattangadi, Deepa Sahi, Shafi Inamdar, Soni Razdan, among many others, with Naseeruddin Shah having provided the voice for a character that forms the story’s moral and intellectual backbone despite his not being present there in person.