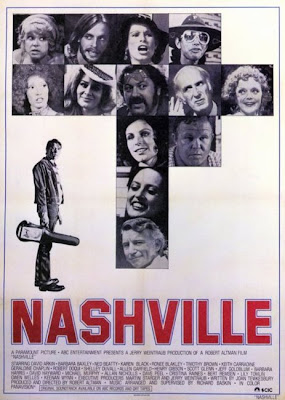 Robert Altman loved making movies with large ensemble casts, and Nashville, his brilliant satire on obsession with celebrities and a fascinating ode to country music, might easily be the greatest of ’em all, and one of the finest American films of that era. This epic film, which follows nearly two dozen characters in its nearly 3-hour length, is set over 5 days in the titutar country music capital of the country. The movie is filled with characters that cover an incredible gamut of personalities, types, backgrounds and alliances – iconic legends of country music, upcoming and failed stars, wannabe singers, blood-sucking journalists, political lobbyists, music aficionados, and common everyday folks – and Altman used this varied crowd to present a brilliantly engaging commentary on popular cultures, societal hypocrisies and human dynamics. The film’s sprawling structure, kaleidoscopic nature and freewheeling narrative arc, which continually shifts from person to person and across a plethora of stituations both funny and poignant, succeded in capturing the mood and nostalgia associated with the zeitgeist of the particular era, and thus managed to be a heart-warming time capsule. Yet, on the other hand, it was also an indictment against the self-serving behavior, hypocrisies, blind obsessions and publicity mongers that are inherent in any society. The drone-like words of a political demagogue that continually interject the various occurrences, and the ironic climax, added layers of astute sociopolitical commentary to this exhilarating masterpiece. This superbly enacted movie boasted of bravado filmmaking, and comprised of a series of wonderful country songs.

Over the years I have warmed up more to the film, although I'll never understand the wild adoration that the film has enjoyed critically. But the satire does come through loud and clear and there is a diversity in the human ranks, and the country songs have always held sway. My absolute favorite Altmans are MC CABE AND MRS. MILLER and GOSFORD PARK, but NASHVILLE and a few others would be pushing close.

Thanks a lot Sam. Yes, this is one of those rare films that has remained a darling for the critics right from its release. Oddly, though I liked Gosford Park, I didn't love it as much as most people have. By the way, would "few others" include M*A*S*H and Short Cuts as well? I loved the former, and as for the latter, I'm planning to see it soon.