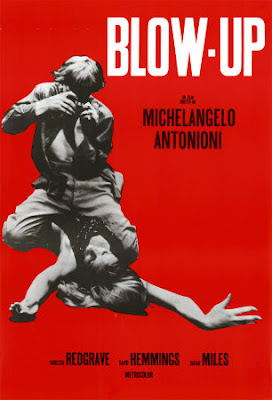 Blow-Up was Italian auteur Michelangelo Antonioni’s first English-language feature and the biggest box-office hit of his career. Though the initial third of the film might seem removed from the kind of movies he was known for on account of it being based during the Swinging 60’s in London, by the time it ends one would realize it wasn’t too different after all. This was the tale of Thomas (David Hemmings), uber-rich fashion photorgrapher living an ennui-laden life of vacuous excesses, who might just have stumbled upon a murder while on an impulse photo-taking tryst at an idyllic looking park – strongly reminding one of the Hitchcock classic Rear Window. The slow-burning sequence where he develops the photographs and brilliantly unscrambles the jigsaw initially based on his hunch and later on his instincts and eye, followed by the fear and paranoia when realization sets in, made for compelling watch. However, though a psychological crime thriller on the surface, in essence the film’s underlying focus was denser and more complex. Antonioni thus used the murder mystery angle as a springboard to probe into his favourite themes, viz. urban alienation, societal detachment, and existentialism, along with commentaries on easy gratification and voyeurism. Thus, though it had some excellent plot developments, by the time the movie ended, plot had taken a complete backseat, leading us to a surreal, intriguing and strangely gratifying finale. Hemmings did a fine job as the movie’s emotionally alienated protagonist, as did Vanessa Redgrave as an enigmatic lady desperate to get hold of the photo-reels.

I think this film is notable in three ways:
1.A great existentialism film
2.A film changed the US censorship along with Who's Afraid of Virginia Woolf in the 1960s
3.Similar plot as great films like The Conversation and Blow-up

I made a mistake,it should be Blow Out in 3

Thanks David for the great summation of this highly reckoned Antonioni film. The first 2 points you've made are spot on. As for the 3rd point, Blow-Up might itself have been inspired from the Hitchcock masterpiece Rear Window.

I'm a massive Antonioni fan but have never rated this one too highly. As you pint out, Shubhajit, the scenes of the protagonist coming to the realisation he'd inadvertently witnessed a murder are brilliant and on reflection it does remind of me of The Conversation (my favourite Coppola). I've always felt a bit iffy about the central character and found him to be quite repulsive. Now, maybe he's just playing his role really well, but for some reason I really disliked him.

My favourite Antonioni by far is The Passenger followed closely by La Notte :)

Thanks Damon for sharing your love for Antonioni's films. Unfortunately, I'm still a newbie where to comes to the Italian master's movies as this is only his second film that I've watched so far (the other being L'Avventura). But yes, both The Passenger & La Notte are already under my radar, and I hope to watch them sooner rather than later.

As for this movie, I'm with you as regards the central character. He's not at all a person I'd like to be friends with; but that said, I agree that this is an indicator to the fact that he played his role to perfection.