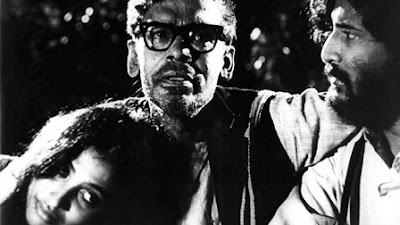 The last film of the perennially misunderstood and mercurial genius Ritwik Ghatak (he made only 8 feature films in his life), Jukti Takko Aar Gappo was a complex and fascinating synthesis of the various themes, ideas, obsessions and stylistic preferences that marked his life and work – thus making this deeply autobiographical film a definitive crystallization of all that he stood for and believed in. Not one to shy away from his personal demons, Ghatak himself played the role of the central protagonist Nilkantha Bagchi, an alcoholic, disillusioned and washed out intellectual who, upon being left by his wife and young son, has now become a happily destitute vagabond. Giving him company are his young protégé and a young refugee girl (Shaonli Mitra). Over the course of his journey he meets an assortment of unique people – a former contemporary (played by Utpal Dutt) who has made it big unlike him (an underhanded reference to his legendary rival Satyajit Ray), a penniless Sanskrit teacher (Bijon Bhattacharya) who joins him in his journey through rural Bengal, a poor village handloom worker (Jnanesh Mukherjee) forever reminiscing about loss of old traditions, and a young and fearless Naxal rebel (militant Leftist). The film abounds in the various themes and ideologies that regularly recurred in his films – undivided Bengal and the horrors of Partition, Leftism and politics, homelessness and familial alienation, fascination with Tagore’s music, and vanishing rural traditions, all presented through his unique melodramatic style filled in equal measures with poignancy and darkly humorous content. No one but Ghatak could have played the role of Nilkantha, a stand-in for Ghatak himself, with terrific supporting turns provided by Bhattacharya and Mukherjee.

We showed Cloud Capped Star at our Cinema society recently and really enjoyed it! Very keen to see more films by this guy and Indian film in general.

Ritwik Ghatak remains one of the greatest Indian filmmakers. However his films were so rooted in a particular sociopolitical milieu that some effort on the part of the viewers is generally called for to fully appreciate his works. Meghe Dhaka Tara (Cloud Capped Star) does remain as his most famous, and also possibly his greatest work, but do also look out for his other films like Subarnarekha (The Golden Thread), Komal Gandhar (E-Flat), Ajantrik (Pathetic Fallacy/The Unmechanical) and this one, i.e. Jukti Takko Aar Gappo.

Argument and a Story is a real gem for defying any particular genre or type. Apparently it looks so simple like the the title, but the more you see and resee you would realise it's so complex. Such a subversive film could only be made by Ghatak. It's metafilmic autobiographical political postmodern weightage all could easily be digested and savoured by the superb dialogues and superlative performance by the auteur himself supported by others. I could still remember when i saw the movie at a special screening each and every scene was whistled and clapped by his admirers and fans as if a Bollywood poitboiler was being screened. He happens to be just another cultural giant like Tagore or Ray in Begalidom as well as the rest of the India but his bohemian life his political affiliation etc made him so controversial that his popularity looked like that of an enfante terrible. And last but not the least, each of his 8 films has been appreciated by countless and that's why it'd be too simplistic to tag anyone as his greatest. Cloud-capped star would certainly be his most popular if not accepted film but that doesn't make the rest of the seven any less significant.

The caustic reference to the contemporary who has made it big at the expense of his socialist artistic ideals is to Samaresh Basu, not Satyajit Ray. Samaresh and Ritwik -- both geniuses -- had been bosom friends for a long time before their rift. Two of Samaresh' most controversial novels were Bibar (dugout, lair, tunnel) and Prajapati (butterfly). Ritwik thought of them as little more than selling sex; hence the reference to Pornography, tunnel and bugs.

Thanks for that info, wasn't aware of that reference. Have read 1 novel by Samaresh Basu (Prajapati; need to read Bibar as well).