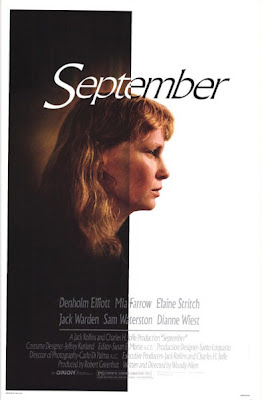 That Woody Allen was a huge admirer of Ingmar Bergman is something every cinephile is well aware of. He remade Scenes from a Marriage into the equally brilliant Husbands & Wives, albeit in his own irreverent style. However, he also made two overtly Bergmanesque films as homage to the Swedish Master – Interiors, which was a terrific nod to Cries & Whispers, and September, this time possibly a nod to Autumn Sonata. The story is set in the idyllic location of a quaint summer house in Vermont; unfortunately, the state of affairs of those present there are anything but peaceful, as guilt, anger, hopelessness and unrequited love occupy their minds and lives. Lane (Mia Farrow) is an extremely vulnerable girl-woman forever haunted by her traumatic past, and shares a deeply complex relationship with her mother Diane (Elaine Stritch), a once-famous actress whose strong personality and gung-ho nature are completely antithetical to that of her emotionally fragile daughter. Meanwhile, the gathering in the house is also witness to a complicated love quadrangle involving Lane who has feelings for Peter (Sam Waterston), an ad-exec and a wannabe writer, who in turn is attracted to Lane’s married best friend Stephanie (Dianne West), while Howard, a mild-natured and middle-aged professor is silently in love with Lane. Though lacking the stark and pristine beauty of his earlier Interiors, this sensitive, heart-wrenching, brilliantly enacted, wonderfully scored and gracefully paced chamber drama remains as another of those rare but memorable ‘serious’ Woody Allen films.

p.s. And there goes my 700th movie review here at my humble blog called Cinemascope, and what better way to reach this milestone than via a movie by one of my favourite filmmakers.

Thanks a lot Hiren :)

OK, I'll admit I'm not quite teh fan of this film as you are Shubhajit, but I still appreciate it well enough to respect the glowing observations you have made here. Yes Allen was a huge Bergman fan, and this film is one of several examples confirming this. Another excellent capsule!

Thanks Sam. I'm aware that this movie isn't considered much by most cinephiles, including Woody aficionados. But his handling of the serious themes and the character dynamics did appeal to me, and not to forget, the marvelous performances by the ensemble cast.