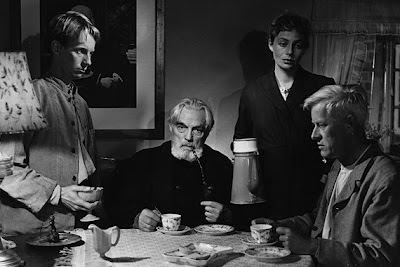 Ordet ranks as one of his greatest achievements of the legendary Danish filmmaker Carl Theodore Dreyer, best known as the maker of The Passion of Joan of Arc. Though his career preceded that of the Ingmar Bergman, the epithet ‘Bergmanesque’ probably defines this movie most accurately, despite the film ending with unequivocal affirmation as to the validity of faith vis-à-vis the kind of moral and spiritual ambiguity that defined the Swedish Master’s films on similar themes. This austere ‘chamber drama’ focused on the lives of Morten Borgen (Henrik Malberg), the deeply religious patriarch, and his three sons – Mikkel (Emil Hass Christensen), an atheist who has no time for blind faith, Johannes (Preben Leeforff-Rye), a mentally ill former student of theology who believes himself to be Jesus, and Anders (Cay Kristiansen), a naïve young guy who has fallen for the daughter of a tailor who practices a very different and harsher faith. The family also comprises of Mikkel’s wife Inger (Birgitte Federspiel), a deeply caring woman, whose critical illness during childbirth, along with the interfaith romance between the two youngsters belonging to families whose patriarchs are hostile to each other, form the key crisis points for the storyline. Captivating conversations, stark B/W photography, elegant pacing, and graceful long takes have been brilliantly used to capture, with astounding effect, the moral tussles between conflicting faiths, as also between faith and its lack thereof. Though the metaphorical finale didn’t fit too well with me, this arthouse classic is sure to keep one thoroughly glued by, among other things, the string of absolutely superb performances by the various actors.

Yes it is indeed 'essential' viewing Shubhajit, and it's a Dreyer masterpiece to sit alongside JOAN OF ARC and DAY OF WRATH, even if those two edge it modestly. ORDET for me would fall as the equal of his earlier VAMPYR, though obviously they are two different films. The metaphorical finale did not please others, so you are not alone on that point. You capture teh film's artistry quite well here!

Thanks a lot Sam. To be honest, this was my first tryst with Dreyer, and the other masterpieces of Dreyer that you've mentioned, viz. Joan of Arc, Day of Wrath & Vampyr - those are already on my must-see list. As for the finale, I'd have probably preferred it more had Dreyer left it more ambiguous instead of a definitive one, but yes, there's no denying its power & artistry.