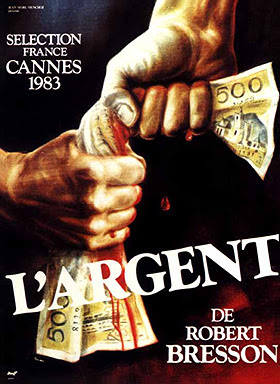 French auteur Robert Bresson, who made just 13 movies in his 40-year filmmaking career, left an indelible impression with his final work too. L’Argent, adapted from a short story by the Russian literary giant Leo Tolstoy, was a masterwork in Bressonian minimalism, stark visuals, bleak yet quietly meditative world-view, and Catholic themes of crime and punishment. The plot device that Bresson used to kick-start the storyline was the passing of a counterfeit currency note from one hand to another. The journey of that note starts from a young boy belonging to an upscale family who resorts to such a transaction without much thought as to how that might end up tragically and irrevocably transforming the life of the person who it finally reaches – an honest and unsuspecting delivery guy called Yvon (Christian Patey). Though not sent to prison, the innocent and mild mannered Yvon ends up losing his job; to sustain his family comprising of his wife and infant child he becomes part of a botched robbery attempt, and this time he is sent to jail. His life turns thus into a series of debilitating tragedies which reaches its nadir when, upon release from prison, he commits an act of such gruesome and unprovoked violence that it is sure to leave viewers reeling with both shock and heartbreak. Not only did Bresson examine class-divide and the destructive power of money, he also brilliant depicted how a simple act of callousness can wreak havoc on the life and family of a person. Like most films of his, Christian viewpoints and social commentary, which abound in the story’s powerful theme, are subtle, disconcerting and profoundly affecting.

You've covered all bases here Shubhajit in this definitive capsule consideration of a Bresson masterwork, a film which I recently saw at the Bresson Festival at the Film Forum, and appreciated for the umteenth time. It's a powerful film with compelling themes and that trademark austerity that marks all his work. Yep, it's about as essential a film as one can see.

Thanks a lot Sam. I can understand the joy you would have experiences at visiting/revisiting Bresson in that film festival. I'm yet to watch all his films, but I sure am already hooked on to his works.

I haven't seen L'Argent [1983], I probably should with the priase you give (and rottentomatoes do).Tolstoy is a master storyteller of timeless works. I definitely admired Bresson's acclaimed films Pickpocket and A Man Escaped, though the characters in both are a little cold and lack feelings in my opinion, which has held me back from seeking out Bresson again. With that said, the stories decide the characters personalities obviously. And Kubrick's work that I love is often reported to be cold, so I'll see if I can watch more Bresson in future.

Its interesting that you raised the topic of acting in Bresson's films appearing cold. Bresson used to employ amateur actors and used to often make them enact the same scenes multiple times in order to strip their performances of theatricality - his intent was to de-dramatize his movies and shift the focus to the subtle details as well as the overarching themes of the storyline - the end results, thus, were stark, meditative and deeply personal works. That's Bressonian minimalism for you. Yet, memorable performances have come out even out of that, as in the brilliant portrayal of the girl who played Mouchette. Thanks Chris for stopping by.