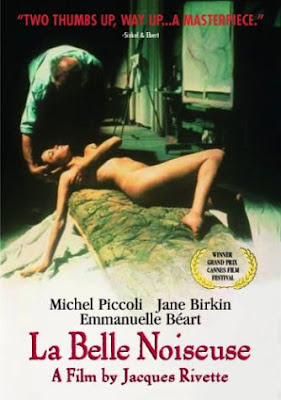 Jacques Rivette used to be considered as one of the most experimental among all the Nouvelle Vague filmmakers when that legendary movement had begun, and his continued love for narrative and stylistic experimentations and challenging subjects is clearly visible in La Belle Noiseuse. Creative processes can often be transformative as well as transcendental experiences, and that forms the principal theme of this fascinating 4-hour long arthouse classic. Edouard Frenhofer (Michel Piccoli) is an ageing but renowned painter who has lost the inspiration for creating any more great work of art, and whiles his time in an enormous mansion with his wife Liz (Jane Birkin). When his young protégé Nicolas presents his alluring girlfriend Marianne (Emmanuelle Beart) to pose for him, he decides to renew the titular work, a nude study, that would be his final masterpiece – a project that he had initially planned to do with his wife but had abandoned a decade back. Thus begins a detailed look into the long, agonizing and arduous execution of the project, with the process being often filmed in real time. Further, while Marianne had grudgingly agreed to it essentially out of anger, the headstrong lady and the eccentric artist forge a nuanced and complex relationship as they converse on various topics related both to art and life while her exquisite beauty and supple body are being transferred to the canvas. Brilliantly enacted, luxuriously photographed and leisurely paced, this deeply philosophical and rhythmic film comprises of a serene surface that just about masks the various turbulences within, making this a ravishing work despite its overtly cerebral nature. Rivette also released an alternate version of the movie, called La Belle Noiseuse – Divertimento.

It's absolutely rhythmic and philosophical, and it's one of Rivette's great masterpieces in my view, a film I was actually thinking about last week while watching the new documentary GERHARD RICHTER PAINTING, which similarly at least in some aspects shows the alluring and fascinating work and progress elements. Beart gives one of teh best performances ever for Rivette, and yes under the surface there are some problems. The cinematography is ravishing, the pacing superlative, almost hypnotizing.

Thanks a lot Sam. Though some might call the film slow, like you, I too was hypnotized by its pacing, and the arresting cinematography. The performances were low-key and understated & worked superbly in the movie's context. I'll try and look up that documentary that you've mentioned.