The Discreet Charm of the Bourgeoisie [1972] 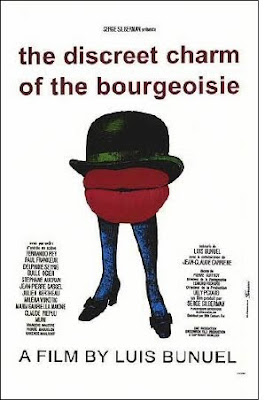 Luis Bunuel was to cinema what Salvatore Dali was to painting, and The Discreet Charm of the Bourgeoisie, considered by many as his greatest work, was his masterclass in surrealism. On one hand this was an acerbic commentary and a trenchant satire on class politics and hypocrisies, while on the other this absurdist comedy was Bunuel’s attempts to play truants on his audience by subverting the very process of filmmaking. The film has as its focus Don Raphael (Fernando Ray), the Ambassador to France of a fictitious Latin American country called Miranda, and his group of wealthy socialite friends. The recurring theme of the movie is their plans of going for dinners that never seem to come to pass – some event or the other, ranging from the mundane, like petty misunderstandings, to the bizarre, like the sudden arrival of an army garrison or their ending up being in a dream, keep obstructing their desire to enjoy a nice meal together. In fact, the dream within dream sequences during the last third of the film would probably rank among the most flippant jokes that a filmmaker has ever played on his audience. Oftentimes the sequences would begin as if they’re being played out in “real” only to end with one of the characters waking up – the one where the group while preparing to dine find out that they are on the stage in front of a jeering audience assuming them to be actors, would probably rank among the most ingenious moments in cinema as also an incredibly witty jab on derivative nature of the medium itself. And if these weren't enough, juxtaposed against the dry humour and mordant ironies are the chronicling of dreams laden with disturbing imagery and symbolisms by otherwise stray characters.

May I assume that this is your first Bunuel?

It's interesting to watch people in Bunuel films being caught in a weird dilemma,incapable of making "easy" decisions for the reason of their own desires.As you watch more his films,this theme becomes clearer and funnier.

Well, this is my second Bunuel - the first was Belle De Jour which I'd watched sometime back. Yes, I ought to watch more of his films in order to get a better hang of his humour, satire & commentaries. Thanks David for stopping by.

I like this movie, and yet sometimes I feel underwhelmed by it. I've seen it three times and felt different each time. I will have to see it again. I like Bunuel, alot, but this one is definitely not my favorite. I love The Exterminating Angel and That Obscure Object of Desire the most.

The two movies you've mentioned are considered among Bunuel's best works, and I hope to see them soon. Thanks Jon for sharing your Bunuel favourites. As for this one, well, I guess it either gets you or it doesn't, but yes I'm not surprised to hear that one reacts to it differently each time - I guess that's one of the hallmarks of a film of this kind.

Good observations you make in your review! I've had The Discreet Charm of the Bourgeoisie on my to-see-list for a while.
I heard the surreal dream elements are comparable to David Lynch, the aspect you mention of not knowing when a dream begins, or ends.

Yeah, the dream sequences were a treat to watch. It would be interesting to see how they feel on repeat viewings, i.e. whether Bunuel has given any subtle hints as to the beginning of the dream sequences. Do watch this fascinating film sooner rather than later.

Excellent review of another essential work of the cinema, and while this late-career satire doesn't quite rank with the likes of VIRIDIANA, THE EXTERMINATING ANGEL, LOS OLVIDADOS, L'AGE D'OR and a few others, it's certainly a masterwork and one of the best films of the 70's. You frame the events, the characters and the arc most superbly here.

Thanks a lot Sam. Well, to be honest, my viewing of Bunuel films is still nebulous at best. There are so many of his universally acknowledged masterpieces, especially the ones you've mentioned, I still need to see. But yes, comparisons aside, this film sure was one hell of an experience.

Bunuel is a legendary filmmaker whose appeal has more or less escaped me up till now. Of what I've seen, my favorites are this one and L'Age d'Or. More often than not, his films leave me befuddled: I feel like I was supposed to have been more shocked and delighted by what I saw, yet I feel rather underwhelmed. I suspect the fault lies with me, but then we all have our blind spots.

Well, Joel, I don't think this is anyone's fault. Its just that we become attuned to the styles of certain filmmakers, and don't for others. For instance, I've never managed to be a fan of Hitchcock in the same way that a lot of others are, though there are a few of his movies that I've considerably liked (particularly Psycho, Rear Window & Vertigo). But then again, I certainly wouldn't rate Vertigo as the best film I've ever seen. Similarly, though I liked Citizen Kane, I've never managed be as big an admirer of it as a lot of people are.

Coming back to Bunuel, Exterminating Angels is my favourite film by him, followed closely by this one. Unfortunately I haven't watched L'Age D'Or yet. Speaking specifically of Bunuel, he's always described as an agent provocateur by all the critics, which automatically makes one feel that we'd be totally shocked by what we see. But, from what I've realized, he underplayed his so-called shocking contents & themes - and this could perhaps be one reason for the cognitive dissonance. And interestingly that's one reason why I've come to admire his works a lot.