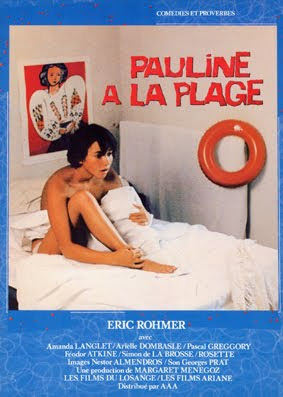 Pauline at the Beach, the third chapter in Rohmer’s much loved ‘Comedies et Proverbes’ series, is a beautifully executed romantic comedy and coming-of-age story. Its seemingly simple structure, gentle touch and light-hearted feel belie its profundity, and subtle yet exquisite observations. Pauline (played quite brilliantly with great restraint and maturity beyond her young years by Amanda Langlet), a lovely and soft-spoken teenage girl, is on vacation at Normandy with her strikingly pretty elder cousin sister Marion (Arielle Dombasle). While strolling on the beach they meet various people, and matters related to the heart that inevitably spring up, affecting both of them quite strongly, form the crux of the storyline. But plot took a backseat as Rohmer went about presenting to us the interesting dynamics that develop between the characters and how they evolve in the process. One’s initial assumption would be that Marion, being the elder of the two ladies, is the more matured as well – but as the movie proceeds one would realize that Pauline is the more level-headed of the two and with greater character depth. And during the closing moments of this gently affecting dramedy one would realize that, despite both of them experiencing heartbreaks during their short vacation, it is Pauline who comes out of the experience as a wiser and a much more matured person who is far more in terms with her own self, while Marion continues to remain the naïve idealist and romantic that she always was. The most memorable aspect about the film was that, despite the various complexities and disentanglements that ensue over its course, everything seemed so natural, real and unforced.

I love this film, and the whole Comedies and Proverbs cycle in general. Summer is always the season I associate most with Rohmer, and his summery beach movies are always gorgeous and poignant and sexy and very profound in a quiet way.

Thanks a lot Ed for sharing your love & enthusiasm for Rohmer in general, and this series in particular. Though I have watched only a few of his films so far, I've already been hooked to his fluid & uncomplicated style of storytelling.

Yes, a beautiful film that presents a basic situation and builds a profound character study in the mold of A SUMMER'S TALE. That's quite right too to categorize it as a dramady and a coming-of-age story. It's a sdtory of small strokes that all add up to a master stroke.

You've summed the film up quite magnificently there. Indeed, Rohmer relies on small gestures & observations in order to build up his films. Consequently there wasn't anything dramatic in here as well, but the end effect, as you aptly said, was nothing short of a master stroke. Thanks Sam.