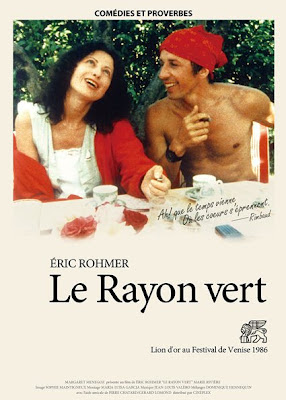 Summer, also referred to as The Green Ray, was the penultimate film in Eric Rohmer’s “Comedies et Proverbes” series. Like most of his films, this too wasn’t plot-centric or laden with heavy symbolisms; rather, the simple storyline concerns matters of the heart – the journey of an idealistic girl in search of true love. Delphine (Marie Riviere) is a deeply unhappy soul who is facing a series of heartbreaks as much for her quest for love as for her eccentric and irrational nature. She is hell-bent on going for a nice vacation during the summer, but the fact that she doesn’t have company to share her time with has further compounded her mental agony. She is also recovering from being jilted by her fiancé, and these all have reduced her to the mental state of a teenage girl. Rohmer provided us with a nicely constructed resolution to the protagonist’s sadness and pain which managed to be simplicity and subtlety personified. However, despite the fame preceding it, I found this to be one of the lesser films of his oeuvre vis-à-vis those I’ve seen so far, as most of its length seemed to be devoted to exploring and portraying certain facets of Delphine’s character and her psyche that could have perhaps been achieved without devoting so many irreverent incidents to that end – rather, the vacation that she finally decides to take and the ensuing incidents there could have been devoted greater screen-time to. Nonetheless, it did manage to succinctly capture the perils, spiritual loneliness and heartbreaks that come with modern urban life, as well as the little joys that, despite their ephemeral nature, make life worth living.

I think part of what I love are the irreverant incidents you mention- the way the movie just meanders and wanders around and the fact that Delphine is so exasperating, yet so compelling. I find myself totally absorbed into her story as I watch this. It gets better everytime I watch. One of my favorite films of all time. I certainly applaud your analysis. I think this is something of a "cult classic" if you will. Those that love it, REALLY love it.

Thanks Jon. Yeah, I'm aware of the fact that this ranks as the favourite Rohmer film for quite a few Rohmer aficionados. I guess I'm the odd one out here on this one. Perhaps, I need to give this film a second chance after some time, and hope that I react to it more favourably on my second viewing of this much loved Rohmer classic.

Yep, it mainly concerns the matter of the heart, and it's one of the Rohmer films I rate on the highest level. Perhaps a recent viewing at Manhattan's Film Forum was the clincher, as the print for the 1986 film was beautiful, and the improvised film featured a brilliant performance by Marie Riviere as the neurotic central character Delphine, who is in search of Mr. Right and an emotional epiphany, both of which she seemingly gains in the film’s final moments where she observes a flash of green on the setting sun (about which Jules Verne penned a story) when she meets with Jacques at Biarritz. The use of playing cards on a few occasions where Delphine encounters to good luck and bad luck as signified by the Queen of Spades and the Jack of Hearts is a wonderful metaphor and the film uses non-actors as well as any film ever made. You have again penned a capsule review of great insight and appreciation, and have added once again to the Rohmer literature.

Thanks a lot Sam. Yeah, it seems I've turned into quite a Rohmer admirer as I've watched quite a few of his films in the last few weeks, and hope to see more in the coming weeks. In fact, my plan is to complete all the movies belonging to his 3 acclaimed series, viz. Six Moral Tales, Comedies & Proverbs, and Tales of Four Seasons, as soon as I can - without of course resorting to any rushing.

Yes, portrayal of the neurotic protagonist by Marie Riviere was quite interesting, as was the usage of playing cards to act as metaphors for her mental states and journey in search of love & happiness. And the final shot was once again a truly revelatory experience, and yet another great illustration of Rohmer's ability to say a lot without really saying much. It must have been a really memorable experience for you to catch up with this film once again at Manhattan's Film Forum.