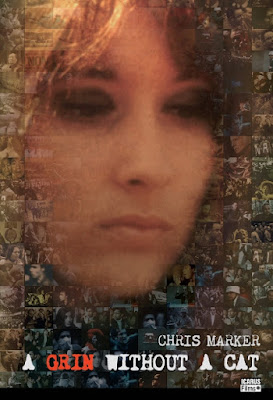 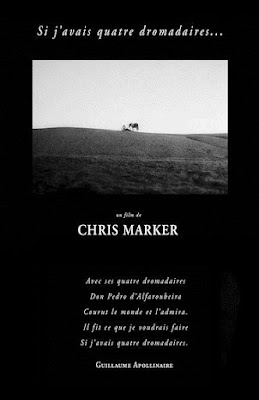 Marker began his dazzling photo-montage If I Had Four Dromedaries with a truism on photography – not just as an artform, but as a philosophy too – in that it’s similar to hunting, albeit with the intent to eternalize the subjects being “shot” rather than to kill them. And, thereon, he crafted something that vibrantly informed the diverse shades that defined his oeuvre – his indefatigable wanderlust, stirring left-wing politics, striking photographic prowess, love for the essay form and profoundly personal voice laced with candour, wit, existentialism and avant garde spirit. At its most elemental, this essay – in the way Vertov did with Man with A Movie Camera, Varda with Salut Les Cubains and Marker himself with La Jetée earlier, and what Reggio would do with Koyaanisqatsi – was composed entirely of still images. He sifted through possibly thousands of photos taken during his breathtaking sojourns across cities, towns and locales – Moscow, Peking, Seoul, Havana, Oslo, Stockholm, Tokyo, etc., and of course his very own Paris – staggeringly cutting across 26 countries; and he used around 750 remarkable B/W ones – accompanying them with a voiceover that was alternately meditative, sardonic, mock-serious and playful – for composing this exhilarating piece. The result was wry, mordant, melancholic, poetic, incisive, and perhaps most importantly – in a myriad subtle measures – richly political. Throbbing urbanscapes, monuments, art galleries, energetic mass of people, candid faces, profiles, narrow alleys, graffiti, billboards, lonely spaces, decisive moments, silhouettes, tranquil landscapes and whatnot were combined into a collage that was euphoric and mournful, freewheeling and self-conscious, trenchant and lyrical. Further, he juxtaposed all these with sudden zoom-ins, abrupt cuts, gradual fade-ins and fade-outs, gentle pans and an idiosyncratic score with some slow jazz thrown in. 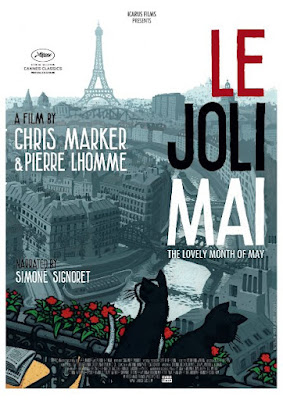 Marker’s magnificently composed, freestyle, structurally innovative and formally fluid “city symphony” Le Joli Mai achieved a startlingly chiselled display of tonal and thematic balance – between meditative and documentation, direct and discursive, playful and agitational, disarming and radical, ironic and edgy, humorous and combative, and poetic and political. Like its illustrious predecessor Chronicle of a Summer from two years back – with a shot of Morin and Rouch to make its influence eminently clear – it was foregrounded on Parisians, in the way they think, interact and exist; however, while the latter had a relatively tighter scope recorded over a longer timeframe, this had a dizzyingly wide arc, albeit within a shorter horizon. He, along with co-director and cameraperson Pierre Lhomme, made this at a delicate juncture for France, with the bloody Algerian War finally coming to an end, thus marking the collapse of French colonialism, while the French society was simultaneously experiencing a consumerist boom. Broken into two halves – personal and impish “A Prayer from the Eiffel Tower” and defiantly political and serious “The Return of Fantomas” – it explored diverse complex themes, including the Algerian war, the French army’s use of torture, racism, exploitation of workers, hubris, housing resettlement, middle-class ennui, etc.; and, on a fascinating note, each idea casually raised in one vignette became the defining leitmotif in the next, thus building an exquisite inter-connectedness. Further – akin to a collection of essays with a prologue and an afterword – this exuberantly began with a lyrical yet sardonic elegy on Paris, and ended with deadpan, discomfiting statistics. And, not least of all, it was gorgeously photographed in high-contrast, intoxicating B/W which captured the immediacy, zeitgeist, malaise and disaffection through its dazzling images. 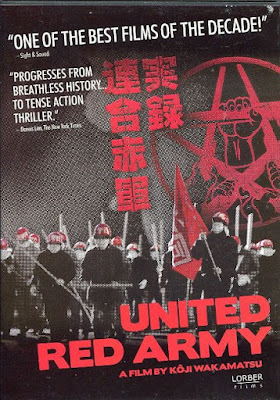