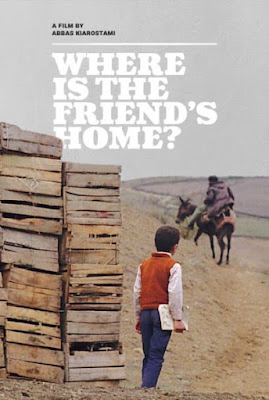 Where Is the Friend’s Home? – the first chapter in Kiarostami’s acclaimed ‘Koker Trilogy’ and the film that got international attention for the Iranian maestro – arguably remains among the finest works involving children. This deceptively simple, disarmingly beautiful and delicately laced neo-realist work enveloped heartwarming themes – the spirit of brotherhood, courage and moral responsibility, with a streak of rebelliousness, heroism and adventure thrown in – and was made with such astonishing formal economy and narrative brevity that its emotional wallop was both subtle and subliminal. Set in the small village of Koker in northern Iran over the course of a single day, it began in a primary school where one of the kids is admonished by the teacher for having done his homework on a piece of paper instead of in his notebook. Hence when Ahmad (Babak Ahmadpour), a fellow eight-year old student, realizes upon reaching home that he has mistakenly taken his friend’s notebook, he decides to undertake a journey to the neighbouring village of Poshteh to return it and therefore help prevent his potential expulsion. In order to do so, he ventures into an unknown place on his own despite being clueless about the exact location of his friend’s house. And, along the way, he must defy his strict mother, evade his cantankerous grandfather, take help of a gentle, garrulous old carpenter – in one of the film’s most memorable deadpan comic sequences – and decipher a lovely alternative, to achieve his objective. Filled with a sense of Sisyphean doggedness and inevitability, absorbing portraiture of the village with its interconnected mud houses and serpentine alleys, and an exhilarating classical score, this work of understated humanism was timeless despite its locational specificity.