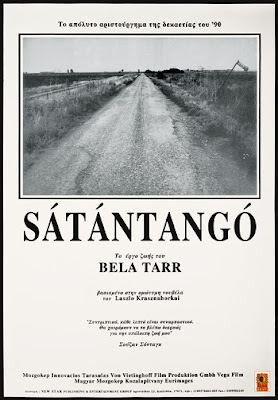 At over 7 hours long, Satantango, Bela Tarr’s magnum opus, is an epic like no other. Though length-wise it might still fall short of the 15-hour long Berlin Alexanderplatz, but unlike the latter it was a far more challenging odyssey – and a more gratifying one too. This incessantly bleak and visually stunning work is a mesmerizing and tantalizing exercise in minimalism and irony, and its subtle political content, viz. commentary on the fall of Communism and the rise of Capitalism, is masked by its philosophical overtures, meditative tone, metanarrative and cinematic brilliance. The film, divided into 12 chapters, covers the lives of a few impoverished village-dwellers who yearn to escape from their sordid existences, and the impact that the return of a scheming soothsayer has on them. Constantly shifting back and forth in time, and with oftentimes the same incident chronicled from different points-of-view, Tarr concocted a complex narrative yarn that turned out to be quite revelatory despite the inherent moral and procedural ambiguity of the film’s content. As has come to be known as Tarr’s signature touch, the movie’s black-and-white photography is breathtaking while its cinematography is visually ravishing despite the desolate landscapes and unremitting rains. Also, it comprises of long moments of silence and inaction, with the camera often silently observing or following its characters in real time, and lest one forgets, is filled with incredible long takes including some audacious shots – like the opening sequence, the bar dance scene, the girl’s walk, the two police officers doctoring a letter, etc. – that lasts for over 10 minutes without a cut (the entire film is made of only about 150 shots, which is a staggering feat in itself). Though a daunting challenge even for ardent cinephiles, this monumental masterpiece makes for an engrossing and unforgettable viewing experience.

Bela Tarr is a director I have yet to get into, I keep hearing praise from bloggers, so it's only a matter of time before I explore his work, though I am worried they might be too bleak and slow for my taste!
Which do you think are his best films? Is it useful seeing them chronologically ?

Well, Bela Tarr's films are indeed slow (incredible long takes, long tracking shots, long moments of silence & inaction, etc.), and bleak too. But, know what, once you get a hang of his films, you'd find those very attributes intensely captivating - I can say that from my personal experience.

As of now I've seen just 3 of his films - Werckmeister Harmonies, The Turin Horse, and Satantango, and I must say all the three are great. I intend to watch his remaining films too soon. And no, you need not seem them in any order - chronologically or otherwise.

One must ask themselves how a film like SATANTANGO with it's exceeding length can be endured by some, when one takes into account the director's propensity for the endless take. I asked myself the same question three weeks ago while taking in THE TURIN HORSE which is also lengthy (but much more modestly so) and I can only say the framing and ravishing compositions hold you mesmerized and unable to look away. Death and decay runs rampant in THE TURIN HORSE, much as it does on some levels in SATANTANGO, and it's a statement by the director on what our present existence portends. The opening eight minutes of SATANTANGO with the cows at pasture is absolutely hypnotizing.

Not enough can be said about the haunting minimalism of the film's composer, Mihaly Vig, a Tarr alumni who cooridinates the aural tone to match the eerie qualities of the visuals. And under Tarr's guidance, Gabor Medvigy's cinematography is painterly.

The cat torture sequence and poisoning is very hard to take, especially as I am an animal lover, and don't think I could look at that segement again.

Absolutely superlative and imapassioned capsule here Shubhajit, truly one of your best.

Exactly Sam. Satantango, seemingly, has everything working against it where popular viewing is concerned - running time of over 7 hours, bleak imagery, incredibly long takes, long moments of silence or the camera simply observing and/or following the characters, ambiguous storyline, fractured narrative, so on and so forth. Yet, each of those facets also played vital parts, in my opinion, in making this such a ravishing viewing experience.

The minimalist structure, along with the low-key sound and breathtaking photography, which you mentioned, added to the mesmerizing beauty of this epic arthouse classic. But yes, it was really difficult even for me to watch the cat torture scene - it was quite obvious that it was a real cat that the girl was dealing with. It was a truly disquieting moment, but one that can't be forgotten anytime soon.

Great that you brought up Turin Horse, which I too loved immensely, and remains as the best film of 2011 for me.

Thanks a lot Sam for the fabulous comment and the kind appreciation.

awesome blog, i love to read your articles....