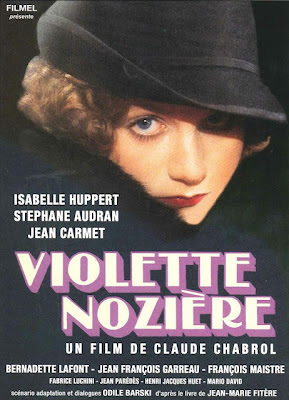 Violette Noziere (or) Violette, a disturbing chronicling of the eponymous girl who was convicted in the 1930s for murdering her father and for attempting to kill her mother, ranks amongst the most renowned works of Claude Chabrol, one of the founding fathers of the Nouvelle Vague movement. The film begins on the fateful day she poisoned her parents with Violette (Isabelle Huppert) reminiscing about her life. The elaborate flashback sequences make it immediately obvious that this young lady has an inherently rebellious streak within her, and that she silently detested the conservatism of her petit bourgeois parents – played by Chabrol regular Stephane Audran as the nagging mother and Jean Carmet as a jolly-old railroad engineer. On account of her deep-set desire for a grander and a more spectacular life, she leads a double life where, in place of the obedient and submissive girl, she is a bold, flashy and unapologetically promiscuous young woman. As a part of this existence of lies and subterfuge, she ends up falling in love with Jean Dabin, a no-good young man whose sole intent is to fleece as much money out of her as possible. The role of the titular character required a serene exterior masking a turbulent and a strong anti-social streak within, and Huppert didn’t just rise to the challenge, but also provided a startling turn as the complex and psychologically disturbed Violette. And the scene, where after poisoning her parents she starts voraciously finishing her dinner, is a truly chilling moment. Another deeply disquieting moment is when her distraught and furious mother suddenly changes her stance towards her with respect to her allegations against her dead father based on rather harmless memory.

Yeah, this movie is excellent. Huppert is amazing in this, projecting such an iconic presence with her constant black coat and hat angled down across her eyes. And I love the way the flashbacks make it so ambiguous what's really going on in her head.

Chabrol would return to a similar theme even more successfully with Story of Women, which also stars Huppert as a historical figure whose crimes set her against society.

Huppert was really captivating to watch, especially the subtle ways her mannerisms, her body language and her facial expressions changed whenever she would move out of parents' eyes. And that slanting look - she really turned that into a fascinating character trait.

I haven't watched Story of Women yet, but I'm aware that it too ranks among Chabrol's best works. Need to see that sooner rather than later.

Yep, this one showcases a theme used again, The double life is chillingly presented as is that final unforgettable scene you note here in this splendidly economical piece. This is certainly a Chabrol that has earned it's reputation.

Thanks Sam. This film is a really great starting point for those willing to explore the works of Chabrol.