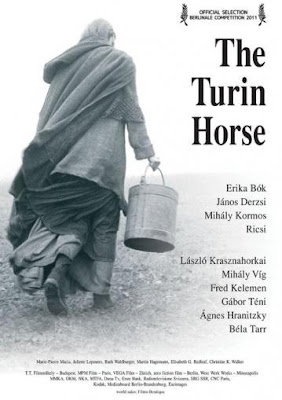 In his final offering as a filmmaker, Hungarian maestro Bela Tarr has created a movie that is so complex, layered and rich, structurally and tonally, that one must put in some efforts in order to appreciate its power and beauty. This profound, minimalistic, quietly observant and deeply philosophical work is a bleak and distressing examination of pain and suffering; yet, quite oddly, Tarr imbued the film with an understated sense of humanism amidst all the gloom and despair. In Turin on 3rd January 1889, as the opening voiceover instructs us, Friedrich Nietzsche witnessed the flogging of a horse by its driver for refusing to move, upon which the German philosopher intervened by throwing his arms around the stubborn animal. This incident is said to have deeply impacted Nietzsche, but unfortunately no one knows what happened to the horse, and this is essentially what Tarr attempts at. He extrapolates till five days after that incident, and thus we get to meet an aged farmer and his daughter who are struggling to eke out some form of survival despite their poverty-stricken lives – more so since their horse is refusing to even eat, leave alone work. With the harsh weather outside their home which is located at the middle of nowhere, what with relentless blizzard and biting cold, their world couldn’t get any more desolate. The film opens with a bravura long-take where we are placed right in front of the nose of the tired-looking horse, with an ominous organ-based background score further accentuating the mood – and this trend continues till the end as the movie is shot using slightly more than a couple of dozen takes. Silently roving cameras are used to capture the mundane and cyclical lives of the two characters (one can easily observe the arduous gruel that the two actors, especially the lady, had to endure while enacting their roles). Stunning B/W photography made Tarr’s masterful swansong look achingly beautiful despite its fatalistic vision.

Despite being a lover of slow cinema (Tarkovsky, Antonioni, Ceylan, et. al) I've never seen any of Bela Tarr's films. Fortunately I'll be catching this on the big screen in March at the AV Festival! My mate also picked up a 2nd hand copy of Satantango for £4 in CeX. What a snatch.

Watching this on the big screen will be a majestic experience, so do not miss that for anything. Yeah, Satantango probably ranks as Tarr's greatest & most challenging achievement. I too haven't watched it yet - one of many things that I need to correct sooner or later.

Word over here is that the film will be opening over the summer. I did acquire a screener copy of it, and found it as great as you did Shubhajit. I didn't count it among the 2011 entries, because of the impending 2012 theatrical opening but this is really a masterpiece for any year. The fatalism, the beauty, the profound minimalism, the sense of humanism, all converge here as you excellently delineate to create a film for the ages, and a fitting swansong to a brilliant career by an icon of the cinema.

Thanks Sam. Great to know that you too agree that this is an incredible powerful yet deceptively minimalistic masterpiece, and a fitting swansong to the Hungarian maestro's career as a filmmaker. Yeah I had been a bit surprised initially when I'd noticed its absence in your 2011 Top 10, as it had skipped from my mind that you make your year-end Top 10 list based on the release date at the US. Its another matter though that in my opinion the lists should be made based on when the film is released, instead of its release date in the US, as that seems more fair & logical to me - after all, what would you do, say, for a film that doesn't release in the US theatres, or releases 5 years after its actual release! But of course at the end of the day its your list, and only you have the right & privilege of deciding the rules for them, and I do respect your decision.

The method your prefer is admittedly the more sensible for sure Shubhajit. The problem over here is that virtually every single US critics sticks with the US theatre release, and if I were to ignore that I would have alist that appears awkward with no conformity. But as you note there are negatives to this as well.

That's a valid point you've mentioned, and I do understand your rationale. And anyway at the end of the day the lists are yours, and consequently it is only logical & fair that the rules & regulations too shall be yours.