Bobby Fischer Against the World [2011] 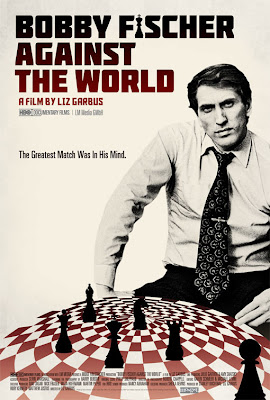 Some sporting duels manage to traverse beyond the confines of the concerned sport to become socio-cultural and at times even socio-political milestones. Mohd. Ali versus George Foreman, Bjorn Borg versus John McEnroe, Ayrton Senna versus Alain Prost, etc. are some of the ones that immediately come to one’s mind. But what would perhaps take the pole position, so to speak, would be what came to be known as the “Match of the Century” – American contender Bobby Fischer taking on the Russian World Champion Boris Spassky at Reykjavik in 1972 – a match that came to symbolize the Cold War faceoff for global supremacy between the two feuding world powers. With that legendary World Chess Championship at its forefront, this gripping documentary has taken a look at the fascinating life, both his meteoric rise and his tragic fall, of iconoclastic and forever misunderstood chess prodigy Bobby Fischer. Fischer took the world of chess by storm with his incredible gameplay and his anti-establishmentarian persona; however, he was also forever haunted by his troubled childhood and his increasing mental disintegration, which in turn led to his becoming a political pariah, his erratic behaviour and self-destructive career choices, and his ultimately dying as a severely lonely person at a far-off country. Filled with enough documentary footage as well as commentaries by people who knew him personally and/or professionally, this thumping HBO docu has managed to give us a peek into the brilliant mind of one of the most iconic and enigmatic personalities of the 20th century.

Interesting... I will try to see this docu.

I wonder, does it include much about his relationships with other chess players, such as Judith Polgar? I remember a news item a few years before he died about some internet prodigy who played unorthodox openings and was thrashing everyone. Despite his renouncing of the game, chess fans suspected it was Bobby finding an outlet for his passion anonymously online. I can't wait to catch this.

@Damon: Well, there are interviews with a few chess players, including, among others, Gary Kasparov (who I consider the greatest chess player of all time) and Judith Polgar. But those interviews are mostly about their professional points of view. And yes, I too had read that piece in newspapers few years back regarding an anonymous internet chess player whose gameplay resembled that of Fischer. Do watch this well-made documentary as I'm sure you'll like it.

I was excited to read Kasparov's autobiography "how life imitates chess" until I saw that it looked like a self-help manual - using the techniques of chess to improve your life.

I love the book on the Fischer-Spassky game all those years back. I was amazed to find out how Fischer utilised psychological warfare against his opponent. The "immoral genius", I guess. I'm sure somebody could make a brilliant thriller about that game to the irresistible backdrop of the Cold War!

Yeah, the Fischer-Spassky duel does form an excellent allegorical tale & even a symbol of the kind of relationship the 2 countries (US & USSR) had during the Cold War era. After all, who has ever heard of a chess championship earning so much mass appeal! And yes, that psychological warfare aspect that Fischer allegedly resorted to has been addressed here. But, after watching the docu one would realize that though his antics did have an effect on Spassky, Fischer didn't really resort to them with that in mind - rather, they were mere expressions of his eccentricity & his increasing mental disintegration.