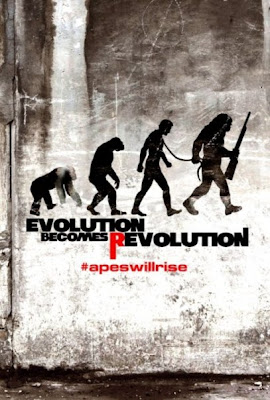 Planet of the Apes has been amongst the longest running as also one of the most successful film series. The 1968 original spawned four sequels as also a remake by Tim Burton. Rise of the Planet of the Apes, the latest addition to the 43-year old franchise, is a prequel to the first film. The film chronicles how Caesar, the offspring of a genetically modified chimpanzee, which was secretly taken to his home and made part of his family by a scientist (James Franco) engaged in cutting-edge research on finding a cure for Alzheimer, eventually takes the evolutionary leap owing to his high intelligence; he becomes the leader of a revolution against the humans by the chimps, thus kick-starting a fight for world dominance. The movie boasts of spectacular special-effects and a number of scintillating set-pieces and action sequences. The superbly staged and choreographed face-off at the Golden Gate Bridge is worth watching. However, that said, this isn't that memorable a film after all. To be frank, it takes the narrative far more time than desirable to reach its crescendo; perhaps the director was at a loss as to whether he should go for a perceptive social commentary or make a muscular action film, and he got stuck at no-man’s land in the process. Including such elements as a power-hungry boss, a sadistic janitor, etc., too seemed clichéd. Nonetheless, the film turned out to be a reasonably engaging watch despite its failings. The relationship between Caesar and his foster father, and especially his changing persona and behaviour (from that of a friendly pet to the leader of a violent rebellion), have been very well captured.

I’ve enjoyed the entire Planet of the Apes series and although I did enjoy The Rise of the Planet of the Apes, I found it confusing as being “a part” of the whole scheme of things. Perhaps it’s just me, but I tend to look for correlation between films if they’re considered parts of a series. For example, the super intelligent primate is named Caesar in both The Rise of the Planet of the Apes and in Conquest for the Planet of the Apes. Coincidence or may be I just need to watch them both again to get it, or maybe the newest film was meant to be like the cartoon series, Return to the Planet of the Apes. I didn’t know that this cartoon series existed, but though it was short lived, I have found it on DISHonline.com. It’s free to watch without signing in, and it’s helping me to cope with the fact that may be not too much thought was put into the newest film making sense as being a part of the series as a whole. I work for DISH so I share your affinity for film, and sometimes these conundrums come up that really boggle the mind!

Thanks a lot for sharing your views about the Planet of the Apes series. To be honest I've not yet watched the entire series, but yes, I do get what you're saying. I guess it would be better not to look for individual plot angles or evaluate the continuity in the series from too critical an angle. Yes, this has been introduced as a precursor to the original Planet of the Apes, but given the fact that two very different directors made them, and that too so apart in time, it would be better to consider it rather as an introductory piece to the series. Further, leave aside continuity, this movie wouldn't anyway manage to stand if it were to be really put under the scanner & critically evaluated even as a standalone film. Thanks again for stopping by, and looking forward to hearing from you again.

Thanks for the advice! They really are a good series of movies; you should watch them sometime because I would be very interested to see your opinion of them.

Thanks Nicole for the recommendations. I'll surely watch them sometime.