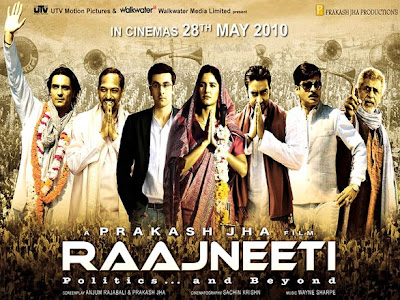 Prakash Jha’s Raajneeti, as the name suggests, is a no-holes-barred indictment against dynasty-based, votebank, dirty politics that is quite prevalent in , in general, and in the North Indian states, in particular. This Mahabharata-weds-Godfather epic shows two warring political families who would go to any lengths necessary, including blackmail and murder, in order for them to win the Chief Minister-ship of the state. The film boasts of a packed, powerhouse starcast – Nana Patekar has given the best performance of the lot, with able turns by Manoj Bajpayee, Ajay Devgan and Arjun Rampal; Ranbir Kapoor has turned out to be a surprising revelation as the cool, sinsister Michael Corleone-esque protagonist; even veteran actor Naseeruddin Shah has shone in his cameo as a firebrand Communist leader. Katrina Kaif, however, is predictably horrendous, and her horrible accent has turned out to be a hilarious parody of Sonia Gandhi, intentionally or otherwise. Though eminently watchable, at the end of the day, the film has turned out to be rather a mixed bad courtesy, largely, the overblown length. A more compact script and tighter editing might have made this reasonably effective film a far more powerful piece of work.

It reminded me of Godfather, Thalapati and Mahabharat. And due to lack of political films in bollywood, it has got high rankings in the media. You are right that it has got overblown length. The crisp start in the begining become diluted while reaching to its end. And too much unnecessary pure hindi and overuse of violence is shown here. I agree with you that - A more compact script and tighter editing might have made this reasonably effective film a far more powerful piece of work.

Thanks Yayaver for the fine encapsulation. You're right, though politics forms a tacit part of many films, movies exclusively based on politics aren't very common - further, the director didn't mince words or sugar-coat the hard-hitting plot. And as you said, the overuse of pure Hindi, especially coming from Ranbir Kapoor's or Katrina Kaif's character, seemed odd.