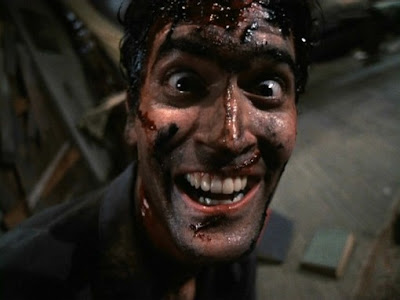 Sam Raimi’s iconic Evil Dead 2 is quite the opposite of his equally iconic debut film The Evil Dead. Though touted as a horror film, it is difficult to be fully considered as one by lovers of this genre as it borders more on the parody front, and has equal doses of over-the-top gore and black humour, unlike the earlier film that was far more genuinely spooky. This cartoonish quasi-sequel saw the return of Ash to the haunted cabin by the woods with his girlfriend. But soon enough she turns into a dancing headless corpse, while he has to fend a new fiend in the form of his hand which gets a mind of its own upon being bitten by her decapitated head. Meanwhile the daughter of the archeologist, who had discovered the “book of the dead” and whose recorded chants had set the evil spirits free, arrives, and must now stop the ghouls once and for all along with the chain-saw wielding Ash, i.e. when Ash isn’t possessed himself. Diabolically funny, unapologetically over-the-top (though with the gore-quotient exponentially clamped down vis-à-vis the first part), and relentlessly fast-paced, this zany roller-coaster of a ride has continued to hold a cult status among B-film aficionados. And the comic talent of Bruce Campbell is on unbridled and uninhibited display here.

I'm loving your Evil Dead reviews! Bruce Campbell definitely makes these movies but I'm glad you called attention to the excellent pacing Raimi employs. Will you be finishing it off with Army of Darkness?

One of the best (and first) horror comedies ever made. What a shame Sam Raimi couldn't recreate the fun for his Spiderman films.

Thanks a lot Alex. I suddenly felt the urge for rewatching the Evil Dead films & review them. Hadn't really thought about Army of Darkness (as far as I remember it was the most comical of the 3). Now that you asked, I say, why not? :)

Well, my knowledge about this genre is limited at best, so I'll take your word for it. The 1st of the Spiderman series was decent though.

"Though touted as a horror film, it is difficult to be fully considered as one by lovers of this genre as it borders more on the parody front, and has equal doses of over-the-top gore and black humour, unlike the earlier film that was far more genuinely spooky."

Aye Shubhajit! Raimi was up to the same game here as he was with last year's DRAG ME TO HELL, another case where horror and comedy were deliciously wed. Campbell is indeed superlative, and beating to its own drum, the film is as good as the first, methinks.

I agree. Quality-wise both the films are on the same pedestal though they are two vastly different films at the end of the day. Where the sequel score over the first is in the improved production values. Also methinks in Bruce Campbell's coming on his own as a lead actor to reckon with. Thanks Sam for your views.

Check this out! Ha!

Thanks a lot Sam for the honour. I really mean it.