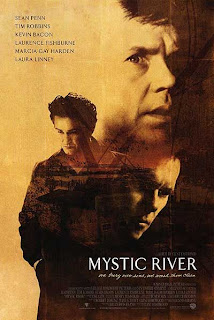 Okay, just for the record, Mystic River didn’t endear itself to me as much as it did prior to my having read the brilliant novel by Dennis Lehane it is based on. But once I realised that its well nigh impossible to compress a dense 450-odd page book into a 2-hour movie, and stopped comparing, I agreed to the fact that this is a damn good movie all right. Companionship of three Boston buddies got silently torn apart when one of the boys got picked up by two strangers; and now a couple of decades later, Sean, a police detective, Jimmy, a former convict, and Dave, a recluse forever scarred by his past, are forced to come together when Jimmy’s teenage daughter is found brutally murdered. The movie boasts of two awesome performances by Sean Penn and Tim Robbins, as the devastated dad and complex man-boy, respectively, with competent supports by Kevin Bacon, Laura Linney and Laurence Fishburn. The relentlessly dark and brooding movie, with its fair share of fatalism, and disturbing albeit compelling references to the vicious cycle of violence, guilt and retribution, has been given a shot in the arm by the ominous tone of the script, arresting cinematography and narrative pacing that has defied genre conventions with gutsy bravado. Agreed, the movie isn’t without its flaws and omissions; nonetheless, this will rank very high among Clint Eastwood’s oeuvre.

I agree Shubhajit, that MYSTIC RIVER isn't quite the great film that it seemed on first viewing, yet I do agree that it one of Eastwood's best of this long run that actually began with this Boston-based thrilled. The acting is top-rank, the location work exceptional, and only some late plot convolutions seemed to mar the deft atmospherics. Still, on balance I'd say it's one of it's year's best films, and sceond to LETTERS FROM IWO JIMA in the prolific line-up from the director.

I too think that this is one of Eastwood's best. I had it at #13 for the decade, so I like it a little more than you or Sam. If I update that list, it will fall a bit due to films that I've since seen, but it will still likely remain in my 20 favorites for the 2000s.

Thanks a lot Sam & Dave for voicing your opinions about the movie.

Well, what I really meant was that Mystic River worked for me better when I'd seen it the first time than it did now because I read the book by Dennis Lehane prior to my second viewing. In fact the same happened with The Big Sleep, the classic noir starring Humphrey Bogart - the reason again was that I'd read the Raymond Chandler masterpiece before I'd watched the movie. I know its being really unfair to the filmmakers because turning a brilliant book into a movie that is as good is almost nearly impossible, and hence one must appraise a movie solely with parameters pertaining to the cinematic idiom. But somewhere in the back of one's mind, comparisons do start coming into play, however hard one tries not to. And the same happened with these movies. Hence, when viewed objectively, as I noted my personal observation, Mystic River IS a pretty good movie. Only that it isn't as brilliant for me any more as it had seemed prior to having read the wonderful book it is based on.

I agree that this is one of Clint's best (like Sam, I think LETTERS FROM IWO JIMA is his best work). Fine acting, I especially liked Penn's work.
Comparing a film and a book is a futile exercise. They are separate and distinct art forms with different artists at the helm and subsequently different visions.

Thanks John. Yeah, comparing two different artforms is an exercise in futility. But somewhere in the back of one's mind the line tends to blur, though one's rationale insists that this isn't really a good idea :)