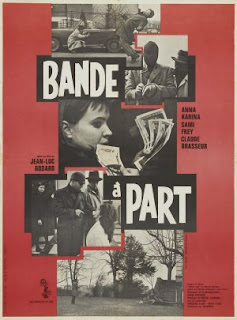 Bande a Part is one of French auteur Jean-Luc Godard’s most accessible films – a film that even non-Godard aficionados would easily enjoy watching. It is often considered as a companion piece of sorts to Godard’s revolutionary first feature A Bout de Souffle (Breathless); Bande a Part, though very much a Nouvelle Vague movie, was comparatively far more traditional in its approach. The plot involves two Parisian buddies, Franz and Arthur (straight out of American B-movies), convincing Odile, a lovely but naïve young lady, to help them in robbing her place, which inevitably leads to disastrous consequences; in the meantime both would-be criminals try all their tricks to seduce Odile. The movie crackles with its delectable charm, deadpan humour and the memorable chemistry between the acting leads. It also comprises of two iconic scenes – an impromptu dance sequence at a café and the trio running through Louvre (which was later paid homage to in Bartolucci’s Dreamers). Quentin Tarantino paid the ultimate tribute to Godard and this movie by naming his now defunct production company Band Apart.

And the one minute silence is a killer!!!

But that was fun as well... Godard manages to pull off stuff that no one could even have conjured!

Thats quintessential Godard for you...

Easily one of my very favorite Godards, which is saying something as I love so many by him. I agree that it's a great "gateway Godard" though of course it holds up even after deeper immersion into his canon, I think...

I have an especially strong inclination towards the early Godard, or rather the first half of his career. What's especially amazing about this film is that it is iconoclastic & freewheeling without ever being inaccessible.

Yeah to follow up on my comment from a quarter-decade ago (!), I'm often surprised how serious Godard fans often dismiss this movie, as if it's too much fun to be as good as the others. To me, its fun gets at the heart of his appeal which is, after all, derived as much from Hollywood entertainment as romantic Hugh art and modern philosophy.

High art. Ugh, thought I fixed all the typos.

Thanks Joel. Yes, I don't agree with what I observe among many - that fun (and enjoyment) and art are inversely proportion. A movie needn't be alienating (emotionally or intellectually) in order for it to be an avant-garde masterpiece or a great formal experiment - and early Godard remains a terrific illustration of that. And this film sure ranks among my favourite films by the incorrigible French iconoclast :)