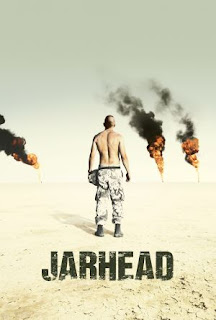 American director Sam Mendes’ third feature, Jarhead is in parts biting, in parts harrowing and in parts heartfelt look at the dumbness of war and the ludicrous bureaucracy of the powers that be. Jake Gyllenhaal stars as a recruit in the US Marine Corps. Born in a family of war veterans, he is proud to don the green uniform. However, it soon changes to discomfiture at the Boot Camp (which is heavily reminiscent of Stanley Kubrick’s Full Metal Jacket), and utter disillusionment during his manic stay at during Operations Desert Shield and Desert Storm. The movie contains a strong political commentary in the garb of a farcical satire, and laced with enough black humour to drive home its point. Even though numerous movies have been made on the utter futility and absurdity of war, the marvelously construed narrative and the impeccable eye for detail here truly separate this out. Add to that the brilliant cinematography that is mesmerizing and disturbing in equal measures, the intoxicating score, and a host of fine performances, and you have one extremely well made and crisply edited war movie that nearly managed to transport me out of the comforts of my living room to the insane and ultimately lousy act of protecting the god-damned oil fields. “Fuck politics! We are here; the rest is all bullshit”. Touché.

I really enjoy Jarhead. It's not the most poignant or meaningful war film ever, but it's put together very well and has appealing stars in Gyllenhaal and Saarsgard (though they could each have easier to spell names...), and Fox is at his best in a role like this.

It's a step below Three Kings in terms of a final product, but is amongst my favorite of recent war movies (and I'm not a huge fan of war movies to begin with).

Hell yeah, me too! The acting was impressive all through the movie. Some directors really have the ability to bring the best of every member of the cast - Sam Mendes is surely one of them. By the way, even Chris Cooper, in the short screen time, was very good. Reminded me of his brilliant turn in American Beauty.

And since you mentioned Three Kings, I must add the striking cinematography and the black humour in the meaningless wars heaped upon humanity by Bush & Son did in many ways remind me of the Clooney starrer.

True - Cooper was great. Though there's no depth (or time for it), his character is amongst his more memorable ones.

Yeah, Jarhead is a cousin to 3 Kings in more ways than one, for sure.